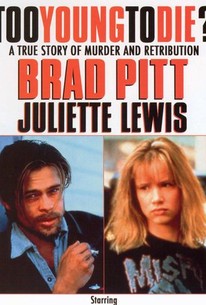 Another "based on fact" TV movie, Too Young to Die? stars Juliette Lewis as a benighted teenaged girl. She is married at 14, is deserted, and begins walking the streets at 15. Abused by virtually every man with whom she comes in contact (including her own father), Lewis commits murder--and finds herself on Death Row before reaching her 16th birthday. Michael Tucker is the attorney who pleads that his client not be tried as an adult. Despite all the horrendous wrongs piled upon Juliette Lewis in Too Young to Die?, her character fails to elicit audience sympathy.

Michael Tucker (I)
as Buddy Thornton

Critic Reviews for Too Young to Die

Taking aim at every level of Italian culture, Martino and Gastaldi put together a surprisingly enjoyable caper. Sure the hard-hitting exploitation of a title and subject like that are dismissed early, but as a film its watchable and nicely put together.

Audience Reviews for Too Young to Die

It was soooo incredibly heart breaking and sad. This was the ultimate purpose of the movie... it was a political movie that tries to get you to be against the death penalty. I felt bad for the killer because of her situation but at the same time, if we let her go, then other people will think they too can get away with murder. I didn't know how to feel at the end. My heart was aching for the young girl and all her bad choices. Brad Pitt was such a sleezeball in this movie.

A story that's baswed on capital punishment for a miner. Juliette Lewis, as ever plays a great role, accompanied by Brad Pitt, who in my opinion plays these type of parts very well, where he's not playing a pretty boy. VERDICT: A though provoking film, enjoyable, definitely worth a watch

Too Young to Die Quotes