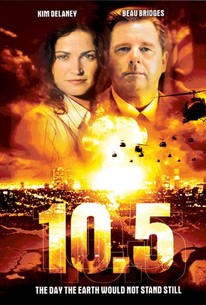 Originally produced as a miniseries for NBC, 10.5 is a disaster film that wonders what might happen if the Western United States is ever ravaged by unprecedented earthquakes. After one quake wreaks havoc on Seattle, another strikes California, this one worse than the first. With scientists speculating that an earthquake registering 10.5 on the Richter scale could be next, the U.S. president (Beau Bridges) enlists the help of a seismologist (Kim Delaney) to somehow formulate a plan to prevent the deaths of millions of people. This film aired under the title Earthquake: 10.5 in the U.K.

There are no critic reviews yet for 10.5. Keep checking Rotten Tomatoes for updates!

Dreadfully wonderfully awful. Every hoary cliche that could be imagined for a disaster movie is crammed in this craptastic mess. Hopeless illogical science-check. A few, very few, decent performances but mostly terrible acting-check, improbable reunions amongst millions of people-check and so much more. A guilty pleasure if ever there was one.

I saw this on TV a couple of years ago as a 2 part drama, had good SFX for a TV film. Not bad at all.

Very entertaining for a television movie, but I don't really think they had to make it 2 hours and 45 minutes long. I like how they at least showed the courtesy of splitting it up into two parts, but I did feel a little drag in the middle. I really enjoyed it, and the cast was wonderful to the film, but there is just something missing to me. For TV, it had decent effects, but this movie was nothing short of a weak movie with an exhilerating start, waiting to be finished. That all being said, I really liked it!