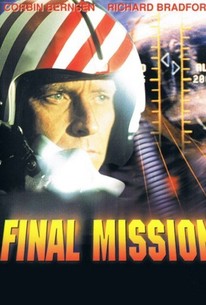 This military action drama stars Billy Wirth as Capt. Tom Waters, an Air Force pilot. Waters has been made part of a secret defense department project involving virtual reality technology, headed up by Col. Anderson (Steve Railsback) and Gen. Breslaw (Corbin Bernsen). However, Waters notices that the flight simulation equipment used for the experiments is behaving in an erratic manner, and two of the other men involved in the project have died while using it. When Anderson and Breslaw are slow to answer questions about what might be happening, Waters begins to wonder just how many secrets are being kept from the pilots involved in the project.

There are no critic reviews yet for Final Mission. Keep checking Rotten Tomatoes for updates!

There are no featured reviews for Final Mission at this time.