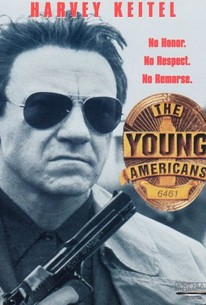 Harvey Keitel plays John Harris, an American drug enforcement officer who is asked by London police to help them in cracking an organized drug ring. The syndicate is run by a ruthless young American who turns disaffected young Britons into hardened criminals. The gang has gunned down a well-known mobster and supplies cheap heroin to dance clubs all over London. Harris hooks up with British police officer Edward Foster (Iain Glen). They discover that the drug ring is just a small part of a huge international mob -- and that a young man whose own father has worked for the American-run mob all his life is the key to cracking the ring.

Critic Reviews for The Young Americans

It looks too much like an American gangster film for the Brits to own it.

Audience Reviews for The Young Americans

I remember getting a free screener for this from the video store I worked for, which was great since Keitel was in it. A decent crime film with another good Keitel performance.