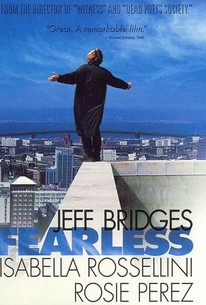 Critics Consensus: This underrated gem from director Peter Weir features an outstanding performance from Jeff Bridges as a man dealing with profound grief.

Critics Consensus: This underrated gem from director Peter Weir features an outstanding performance from Jeff Bridges as a man dealing with profound grief.

Critic Consensus: This underrated gem from director Peter Weir features an outstanding performance from Jeff Bridges as a man dealing with profound grief.

Adapted by screenwriter Rafael Yglesias from his own novel, Fearless explores the complex struggle back to mental health of post-traumatic stress disorder victim Max Klein (Jeff Bridges). One of few survivors of a fatal plane crash, Klein remains calm and assists other survivors out of the burning debris, earning praise as a hero by the media. After stoically departing the tragedy without a word to emergency officials, Max returns home with detached feelings towards his wife (Isabella Rossellini) and son, along with a bizarre, seemingly authentic belief that he is now impervious to harm. Bill Perlman (John Turturro), a psychiatrist for the airline, fails to reach Max about his newfound fearlessness, but asks for his help in aiding Carla (Best Supporting Actress Oscar nominee Rosie Perez), a fellow crash survivor filled with grief and guilt over the loss of her baby. In one of his earlier roles, Benicio del Toro plays a small part as Carla's boyfriend.

Fearless is the rare commercial movie that raises more questions than it answers. You leave it in an altered state yourself--moved, not quite satisfied, but certain you've seen something out of the ordinary.

Bridges is fine, especially in the ethereal early moments, and manages throughout to convey an altered state of mind that rivets the viewer.

As often with Weir, there's considerably less here than meets the eye.

Mr. Bridges does well with a difficult role.

There are times when "Fearless" really soars, thanks to bouts of good writing by Rafael Yglesias and direction by Peter Weir and a stellar performance by Bridges.

Bridges turns in another in what has become an astoundingly long list of brilliant performances. Using the simplest means imaginable, he steps into a role as nonchalantly as he might slip into his trousers.

A bad movie that doesn't even serve as entertainment. [Full Review in Spanish]

Like the movie itself, Daviau's cityscapes are striking, mysterious and emotionally charged.

Both [Jeff] Bridges and [Rosie] Perez are exceptional in this movie that explores the stages of fear and what two people did to overcome them.

In Fearless, fear-not just overcoming it, but experiencing it-connects us to our deepest selves, and to each other.

...it's the sense of sadness that gives the movie its backbone.

Especially as acted by Jeff Bridges, in one of the best performances of a career laden with outstanding work, Fearless is a bottomless character study.

Jeff Bridges shines in this layered and intense character study.

Great central performance by Bridges. It's a shame this hasn't gotten a proper DVD release. It's a TRAVESTY that's it's only available in pan & scan.

Really this movie is at 86%? I had to watch it in psych class the other day, and I thought it was prettyyy boring. I also wasn't really paying attention either. Movies like this don't interest me.

"Some people are afraid of nothing." A man's personality is dramatically changed after surviving a major airline crash.

REVIEW
Powerful and inspirational depiction of the human spirit's quest for closure. After surviving a terrible airplane crash, Max Klein (Bridges in arguably the performance of his career) finds himself in a state of near nirvana as he assumes he's untouchable in the realm of death, until he learns of another survivor (Rosie Perez in her Oscar-nominated poignant role), nearly catatonic due to the death of her infant in the aftermath. Ethereal and genuinely moving with some unexpecting moments of humor and unabashed honesty. Features one of the more realistic airplane crashes in film history and a hypnotic score. Excellent direction by Peter Weir and screenplay adaptation by Rafael Yglesias based on his novel. Memorable scene: Car test with U2 on the soundtrack. Hypnotic.