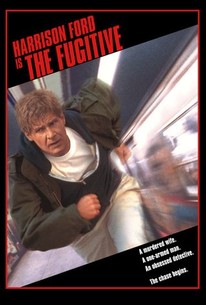 Critics Consensus: Exhilarating and intense, this high-impact chase thriller is a model of taut and efficient formula filmmaking, and it features Harrison Ford at his frantic best.

Critics Consensus: Exhilarating and intense, this high-impact chase thriller is a model of taut and efficient formula filmmaking, and it features Harrison Ford at his frantic best.

Critic Consensus: Exhilarating and intense, this high-impact chase thriller is a model of taut and efficient formula filmmaking, and it features Harrison Ford at his frantic best.

This 1993 box-office smash partly adheres to the 1960s TV series on which it is based and partly goes off on several tangents of its own. Harrison Ford stars as Dr. Richard Kimble, convicted of murdering his wife. While being transferred to prison by bus, Kimble is involved in a spectacular bus-train collision (one of the best of its kind ever filmed). Surviving the disaster, Kimble escapes, vowing to track down the elusive professional criminal whom he holds responsible for the murder. Dogging the fugitive every foot of the way is U.S. marshal Sam Gerard (an Oscar-winning turn by Tommy Lee Jones), who announces his intention to search "every whorehouse, doghouse, and outhouse" to bring Kimble to justice. Unlike his dour TV-series counterpart Barry Morse, Jones plays the role with a sardonic sense of humor: when a cornered Kimble screams, "I didn't kill my wife," Gerard shrugs and famously replies, "I don't care." Once the premise has been established, scripters Jeb Stuart and David Twohy and director Andrew Davis pull off several audacious plot twists, ranging from Kimble's rendezvous with a sympathetic lab technician to a jaw-dropping dive into a huge waterfall. The second half of the film offers one surprise after another (including the true identity of the murderer), brilliantly avoiding the letdown that plagues many movie adaptations of old TV series. ~ Hal Erickson, Rovi

Cynthia Baker
as Woman in Car

Brent Shaphren
as Doctor at Bar

B.J. Jones
as Doctor at Bar

Drucilla A. Carlson
as Gerard's Secretary

Juan Ramírez
as Man on "El"

News & Interviews for The Fugitive

View All The Fugitive News

Critic Reviews for The Fugitive

Call something a "real train wreck" and it's considered a put-down. Not in this fast-track, no-stops chase movie with a massive train-wreck scene that's going to have audiences scrambling for cover.

Working from a tight script by Jeb Stuart and David Twohy, director Andrew Davis has fashioned a crackling, intelligent thriller.

The film is little more than a well-oiled machine that serves a strictly limited function, but like a precision timepiece, it is a thing to marvel at, even under close scrutiny.

For dynamite suspense loaded with thrills and wicked fun, you can't beat The Fugitive.

It's a film that uses its spectacle to set up its characters, rather than to pay off its stakes.

Led by two stellar performances, The Fugitive has certainly managed to withstand the test of time.

For the majority of moviegoers born after the last episode, The Fugitive will be entirely new. But for both groups, this should be a highly satisfactory action picture, one that crowns Davis as this summer's new reigning master of the genre.

In many ways The Fugitive represents the pinnacle of a genre not much in style any more: the suspense/action picture.

Directed for maximum impact by Andrew Davis, this contains enough suspenseful set-pieces, clever red herrings and spectacular stuntwork to satisfy most thriller aficionados, yet what really makes the movie work are the performances by Ford and Jones.

Audience Reviews for The Fugitive

Somewhat based off of the 1960s TV series, this is the story of Dr. Richard Kimble, a vascular surgeon accused of murdering his wife, He claims a one-armed man did it, and, after surviving a spectacular crash during a prison transfer, Kimble escapes and goes on the run to cleat his name, and find out who actually committed the crime, and why. Things aren't so easy though, because hot on his trail is a determined team of U.S. Marshals, lead by the relentless Deputy Sam Gerard. This is hands down one of the finest, most intelligent, and gripping action/suspense thrillers out there. The characters are well written, developed, and compelling, their motivations are clearly defined, the basic story, though simple, is imminently engaging and watchable, and the execution, primarily Andrew Davis's direction, is just top notch. This is more than just a chase movie. It's a study of determination and perseverance. These are just great characters to watch, and whether it is Kimble, or Gerard and his team, you want to see them complete their goal. I saw this movie many times as a kid, mostly because it took multiple viewings (especially at a young age) to really understand some of the finer points and nuance. The other times though, it was just to marvel at the top notch movie making. The stunts and chases are great, and I love the use of mainly practical effects and actual vehicles, like the train. That scene alone is just phenomenal. Top have it just be one of several stand out set pieces is an incredibly unbelievable treat. Speaking of treats, it's also a joy to see small roles filled by Julianne Moore (on the verge of mega stardom), and Jane Lynch, who was definitely appearing here before she became well known. The acting is wonderful, with both Ford and Jones giving some of their best work. Jones got an Oscar for his portrayal of Gerard, and, while I do think it's a great performance, I don't know if he really deserved an Oscar. Also, this film, for better or worse, really got him typecast too. All in all, this is a superb thriller, and one of the best of both the 90s overall, and it's specific genre. Yeah, the rewatch value is debatable, and it sucks that the sequel wasn't quite to this level, but I'm just thankful that this film exists at all, as it is a wonderful reminder of how great the result can be when love, care, and effort are put into what could have been a generic thriller.

Harrison is brilliant in this movie. Great storyline about a doctor who is framed for his wife's murder. He escapes from a prison van during a road accident and goes on the run to find the real killer. Great cast.

Harrison Ford is one of those actors who can take any role, no matter how ridiculous it is, and turn it into something worth watching. He works in every movie he's in and The Fugitive is no exception. In The Fugitive, Ford plays Dr. Richard Kimble who is accused of killing his wife, even though he didn't do it. The movie focuses him on the run from the police, lead by U.S. Marshall Samuel Gerard. Gerard is completely intent on capturing Kimble and the only thing he wants is him in the hands of the law, not even caring about what Kimble has to say. The acting by the two leads is great. Even though Ford is on the run, you're still on his side and I actually sympathized for him because he's really a nice guy deep down and Ford does a superb job of conveying that. Tommy Lee Jones plays Gerard and he's just awesome. You don't really have to listen to him when he says he wants to capture Kimble because you can see it in the way he acts and speaks. Jones deserves credit for pulling that off. The action scenes in the movie are very intense. The scene where the bus crashes on the train tracks is handled with great special effects and it's actually suspenseful. The most intense scene for me is the scene where Gerard is chasing Kimble in the dam. No matter how many times I watch that scene, it always has me glued to the screen. The film also has unexpected plot twists that M. Night Shamalamadingdong couldn't even dream of. After seeing the movie, I found out it's actually a spin off of TV series in the 60's. Since I've never seen the show, I couldn't analyze as to whether or not the film stayes true to source material. Regardless, I still probably wouldn't have minded had it changed stuff. The Fugitive is one of the best action movies ever made in my opinion, I loved the cast, I loved the intensity, it kept me on the edge of my seat, the characters were perfectly crafted and acted and it's an all around brilliantly directed film.

Director Andrew Davis' The Fugitive is a solid action packed thriller about a reputed doctor who gets falsely accused of murdering his wife. He escapes from custody and being hunted down by the U.S Marshals office, tries to find proof to prove his innocence. Actor Harrison Ford plays Dr. Richard Kimble who is accused of the murder. Ford is intense in his role, and Tommy Lee Jones plays Deputy Marshal Samuel Gerard who is tasked of hunting down Kimble. The Fugitive is a great action thriller that is highly entertaining and with a great cast here, director Andrew Davis crafts a solid film that will keep you on the edge of your seat till the very end. This an exhilarating film and I thoroughly enjoyed every minute of it. Harrison Ford is great in the part he plays, I especially enjoyed the screen time that Tommy Lee Jones and Harrison Ford shared. These, for me anyways, were some of the strongest moments of the film. The Fugitive is a well constructed film that delivers the thrills and has enough action to please the action buff as well. The Fugitive is a great film that has some awesome scenes, my favorite being the one where Harrison Ford escapes from Tommy Lee Jones in the dam. This is a very entertaining film and the cast along with the clever storytelling, well paced plot development, makes The Fugitive a must see film. This is a well crafted action thriller that no serious film fan should pass up. The Fugitive is an effective, pulse pounding action thriller from beginning to end. A terrific film.