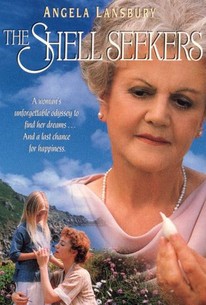 The made-for-TV The Shell Seekers was based on the best-selling novel by Rosamunde Pincher. Heading the cast is Angela Lansbury as Penelope Keeling, a reclusive British matron of comfortable means who suffers a near-fatal heart attack. While recovering, Penelope determines that her attack was a sign of sorts, urging her to get her life in order. As she prepares to break down the barriers she has built between herself and her three children, Penelope muses on her experiences during World War II, a time in which she solidified her outlook on life. Filmed in England and Spain, The Shell Seekers was the 162nd Hallmark Hall of Fame presentation; it debuted on December 3, 1989.

Irene Worth
as Dolly

John Rowe
as George
View All

Critic Reviews for The Shell Seekers

This engaging drama presents some thought-provoking approaches to life review, mothering, the art of happiness, and the redemptive power of love.

Audience Reviews for The Shell Seekers

Lovely performance by Angela Lansbury as a woman looking to reconnect with something she has lost in her past. Beautiful scenery.