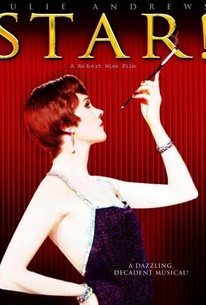 Touted by 20th Century-Fox as a follow-up to their enormously successful The Sound of Music, Star! reteams that earlier film's leading lady Julie Andrews and director Robert Wise. Andrews plays legendary musical comedy star Gertrude Lawrence, while Daniel Massey appears as Lawrence's friend, co-worker and severest critic Noel Coward (Massey's real-life godfather). The film jumps back and forth in continuity at times, its transitions bridged by fabricated newsreel footage; essentially, however, William Fairchild's script traces Lawrence's progress from ambitious bit actress to the toast of London and Broadway. Her success is offset by a stormy private life, which is given some ballast when she falls in love with an American financier (Richard Crenna). The film is way too long for its own good, though the musical set pieces -- especially the Andrews-Massey duets -- are superb. Julie Andrews welcomed the chance of playing a character as far removed from her goody-two-shoes heroine in Sound of Music as possible; Gertrude Lawrence was temperamental, sarcastic, profane and at times self-destructive, and Andrews makes a meal of the role. Unfortunately, Andrews' fans, conditioned by the Fox publicity machine to expect a continuation of Sound of Music, rejected her outright in this "new" characterization. Star! was a huge box-office bomb, so much so that Fox desperately attempted a shortened re-release under a misleading new title, Those Were The Happy Times. They weren't: it remained a financial disaster, though it has developed a loyal cult following in recent years.

Conrad Bain
as Salesman at Cartier's

Roy Scheider
as No credit
View All

Julie's in fine form and some of the production numbers, especially Jenny, are eye popping but it's just too long.