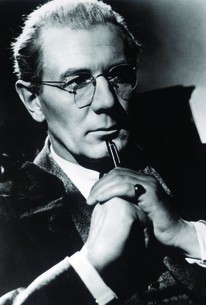 Michael Redgrave gives his greatest performance as Andrew Crocker-Harris, a boarding-school teacher who realizes that his life may be a failure, in this powerful adaptation of Terence Rattigan's play with a screenplay by Rattigan himself. Poor health forces Crocker-Harris to give up his teaching position after years of thankless service and scorn from his students and colleagues. His marriage to Millie (Jean Kent) is also in free fall, as his wife is openly having an affair with the school's chemistry teacher, Hunter (Nigel Patrick). The sensitivity of one student (Brian Smith) breaks through Crocker-Harris's reserved British exterior, but it takes the final departure of his wife, right before the school's graduation exercises, to wake him up once and for all. He discards his prepared speech and speaks openly to the assembled students, delivering a moving apology for having failed them as their teacher. The film's rich montage of incident and character detail builds to intense emotional heights that make this version of +The Browning Version a classic.

Critic Reviews for The Browning Version

The role of the retiring master is not an easy one, but a prize in the right hands. Michael Redgrave fills it with distinction.

Worth watching for Redgrave's powerfully detailed performance as the schoolmaster.

What begins as an anti-Goodbye, Mr. Chips ends, thanks to some psychological point stretching, as an imitation of it.

The schoolmaster to whom our pity is drawn is a pretty weak and lukewarm individual, hardly fit to be a teacher of growing boys -- even a teacher of classical languages, which he is.

The year's top acting job, beyond any doubt-beyond any doubt of mine, at least-was that of Michael Redgrave as the despairing schoolmaster in The Browning Version, a superior item from Britain.

When you have Michael Redgrave giving one of the best performances in cinematic history on top of it all, there's not much else left to say other than: bravo.

It's a blues pic for teachers that lays down some hope in the end.

It's a remarkable piece of writing by Terence Rattigan, the great English playwright, and great direction by Anthony Asquith to drag us through such an arid landscape and keep us interested, involved and finally moved

Crocker-Harris represents the 'Willy Loman' of the educational system

Dramatically powerful, exceptionally well acted and not without its tearful moments of reexamination and redemption...The Browning Version is a...masterwork of a film

Perfect film version of the play.

Audience Reviews for The Browning Version

a devastating character study with superb performance by michael redgrave. the antithesis of goodbye mr. chips