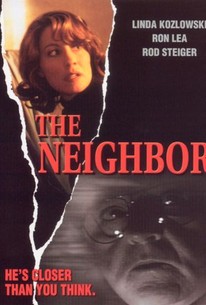 In The Neighbor, newlyweds Mary and John Westhill (Linda Kozlowski and Ron Lea) buy the family home of a retired ob/gyn named Myron Hatch (Rod Steiger), who has moved into the house next door. Taken with Mary's resemblance to his dead, sainted mother, Myron becomes obsessed with her, and frames John for murder.

Critic Reviews for The Neighbor

There are no featured reviews for The Neighbor at this time.