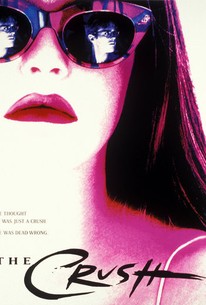 The Crush is a psychological thriller wherein a young man is the object of the obsession of a mentally unbalanced young girl. Journalist Nick Elliot (Cary Elwes) rents the guest house of a wealthy couple. The family's 14-year-old daughter Darien (Alicia Silverstone) flirts with him, and when her advances are not reciprocated she becomes increasingly obsessed with him resorting at last to violence and murder. Alicia Silverstone is beautiful and surprisingly good as the obsessed girl. Cary Elwes is also good in conveying his attraction and restraint in his dealings with so young and troubled a girl. However, the premise of the man being trapped by the aggressive, vengeful female is somewhat outdated and cliched. The Crush which should concentrate on the motivations of the girl, instead focuses on her increasingly violent acts, which include the vandalism of Nick's car and the attempted murder of his girlfriend. None of the characters are very real, and the plot is contrived, depending on illogical coincidence and implausible behavior by the principal characters. The Crush, an exploitive, cliched melodrama masquerading as a thriller, fails to either surprise or thrill.

Critic Reviews for The Crush

Leaves much to be desired.

There's something scuzzy about the whole exercise.

The story not only relies on the complete and unalterable stupidity of every character in the movie, but on the gullibility of those who watch it.

As directed and written by Alan Shapiro, this proves a crushingly childish and silly attempt at a thriller.

An infectious little psychodrama, one with high replay value.

Alan Shapiro's The Crush suffers from a distinct lack of believability, turning what should have been a tense and horrific tale into a laughable mess.

One of the stronger thrillers cut out of the cloth of "Fatal Attraction."

The movie is only briefly offensive and rarely surprising.

The Crush is the movie that child abusers have been waiting for.

A highly implausible but somewhat above-average and entertaining 'yuppie in peril' thriller.

The Crush would be an entirely worthless and painfully familiar little thriller even without its creepy devotion to the sexiness of youth.

Audience Reviews for The Crush

An ok movie. here are movies that are 10 times better than this one.

Alicia Silverstone was in a TV movie, but "The Crush" was her first major movie, and she did a great job. She plays as a 14 year old girl who has an obsessive crush on her new babysitter, a 28 year old journalist (Cary Elwes). The guy tells her that he's not interested because she's too young, but she just won't give up with her obsessive crush, and ends up getting him in major trouble. "The Crush" isn't one of my favorite movies of all time, but it is a good movie to watch. It has a great acting and it's even a little bit suspenseful at times. I recommend anybody to at least watch "The Crush," if not buy it. NOTE: That was my Amazon review from the year 2001.

In her film debut,the attractive Alicia Silverstone plays Darian Forrester,a mentally disturbed 14 year old girl who develops an unhealthy obsession with her neighbour,Nick Eliot (Cary Elwes)a baby faced blonde hair,blue eyed journalist who has no sexual interest in her.Silverstone shines in her role as the villain,making life hell for Nick,who wants nothing more than a friendship with the girl next door.Darian's desperate attempts to seduce the older man are unsuccessful,driving her deeper into her obsession and making her more psychotic.Silverstone's acting is superb,but her facial expressions are what is so convincing about her performance.Alicia superbly transforms herself from sweet and innocent into scary and psychotic giving new meaning to the phrase,'When she was good she was very very good,and when she was bad she was horrid'. The film has you on the edge of your seat as the plot unravels,and truths are discovered about sweet little Darian Forrester who is crazier than anyone thought.Her anger at Nick for leading her on goes to the extreme until she comes up with a plan she hopes will destroy his reputation.Nick is oblivious to Darian's feelings for him and believes its nothing more than a silly school girl crush that will pass until he discovers just how dangerous Darian really is.

not rememberable at all