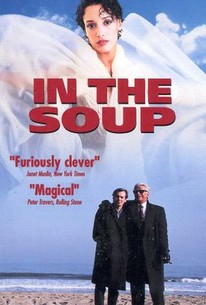 In the Soup Photos

Alexandre Rockwell's quirky autobiographical comedy stars Steve Buscemi as Adolpho Rollo, a would-be screenwriter who is obsessed with getting his 500-page script "Unconditional Surrender" produced. Desperate for money, he places an ad for financial backing, which is answered by con man Joe (Seymour Cassel). The film was shot in color, but was released theatrically in black & white. Both verisions eventually made their way to home video release.

Will Patton
as Skippy

Critic Reviews for In the Soup

A charming pipsqueak of a movie, a playful film of ragged and shaggy appeal.

A droll, self-conscious fable with an unexpected heart of gold ...

[Actor] Cassel seems to be a variation on the noble/foolish hero played by Ben Gazzara in Cassavetes's The Killing of a Chinese Bookie, but you certainly don't have to know this source to respond to Cassel's enormous funds of charm and charisma.

Because of the generally poor quality of character development, I just didn't care about how things resolved themselves. A strong ending might have redeemed something from this mess, but it was not to be.

There isn't enough one could say about the casting in this film -- it's simply perfect. The story is elevated by the chemistry and sense of improvisation between Buscemi and Cassel.

Though not great, it's easily Rockwell's best work, a playful film with darkly comic twists, played out nicely by Steve Buscemi and Seymour Cassel, who's over-the-top but the film allows that.

Yes, it's an old story that has been told a thousand times before and since, but Alexandre Rockwell's little film has a home movie charm and a streetwise wit that make it a must-see sleeper.

Beals has taken a strange route since Flashdance, arriving here as the object of Buscemi's desire, but it's Cassel's hood with a heart who steals the spotlight and all the best lines.

In the Soup's charm is based in its humor, in its odd bits of business that happen in the margins.

Audience Reviews for In the Soup

There are no featured audience reviews yet. Click the link below to see what others say about In the Soup!

In the Soup Quotes