The Last of the Mohicans1992 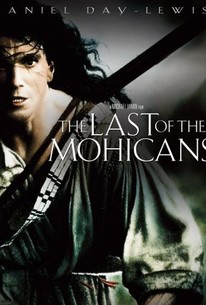 Critics Consensus: The Last of the Mohicans is a breathless romantic adventure that plays loose with history -- and comes out with a richer action movie for it.

Critics Consensus: The Last of the Mohicans is a breathless romantic adventure that plays loose with history -- and comes out with a richer action movie for it.

Critic Consensus: The Last of the Mohicans is a breathless romantic adventure that plays loose with history -- and comes out with a richer action movie for it.

The Last of the Mohicans Photos

Director Michael Mann based this lushly romantic version of the James Fenimore Cooper novel more on his memory of the 1936 film version (starring Randolph Scott) than on Cooper's novel (in fact, Philip Dunne's 1936 screenplay is cited as source material for this film). Set in the 1750s during the French and Indian War, the story concerns Hawkeye (Daniel Day-Lewis), the European-born adopted son of Mohican scout Chingachgook (Russell Means). Hawkeye and his party, which also includes the Mohican Uncas (Eric Schweig), joins up with a group of Britons who have recently arrived in the Colonies. The group consists of Cora Munro (Madeleine Stowe) and her younger sister, Alice (Jodhi May), who are rescued from a Huron war party by Hawkeye. Hawkeye's band accompanies them to the British Fort William Henry, which is being besieged by a French and Huron force. The fort falls to the French, and Colonel Munro (Maurice Roeves) surrenders to French General Montcalm (Patrice Chéreau). The terms of the surrender are that the British merely abandon the fort and return to their homes. However, the French's bloodthirsty ally, the Huron warrior Magua (Wes Studi), has made no such agreement, and, as the British retreat from the fort, he plans to massacre them in a terrible Huron attack. ~ Paul Brenner, Rovi

Jodhi May
as Alice

Mark A. Baker
as Colonial Man

Eric A. Hurley
as 2nd Soldier

News & Interviews for The Last of the Mohicans

View All The Last of the Mohicans News

Critic Reviews for The Last of the Mohicans

The Last of the Mohicans gets off to a bumpy start, gathers feeling and momentum and comes roaring into the homestretch at full gallop. When this historical adventure kicks in, it's thrilling in the way old-fashioned epics used to be.

...the action is richly detailed and thrillingly staged.

...not as authentic and uncompromised as it claims to be - more of a matinee fantasy than it wants to admit - but it is probably more entertaining as a result.

Mann wasn't thinking story, he was thinking scheme. Keep the eyes and ears dazzled, he reasons, and the substance will follow.

Painstakingly, breathtakingly re-created by director Michael Mann, this landscape makes room for heroes with principles greater than the circumference of their biceps.

He conceives of the story as if it were a gigantic piece of mood music.

A solid adventure tale told with intelligence and great energy.

Filmmaker Michael Mann kicks of The Last of the Mohicans with a muddled and mostly baffling opening stretch...

"The Last of the Mohicans" is, in short, an adventure flick for the intellectually unadventurous.

Amazingly consistent with the spirit of the original. The only disappointment in the cinema is the feeling that the whole thing ends too soon.

Mann's triumph derives not from his characters but from his vistas and big moments of action. The panoramas of mountains, in still unspoiled North Carolina, fill the screen with the glories of pre-industrial America...

I found certain elements to be brilliant and others to be rather flat.

Audience Reviews for The Last of the Mohicans

One of the best motion pictures ever made. An emotional, rich journey full of plenty of twists and turns, with the perfect hero to root for in Day-Lewis. The most impressive aspect of the entire film is director Michael Mann's eye for scenery - as this movie contains some of the most breathtaking in cinematic history. The love story between Lewis and Stowe is constructed beautifully, and the plot is paced to utter perfection. In addition, Wes Studi turns in a frightening, unforgettable performance as a man stripped of basic human emotions, whose thirst for revenge is what makes him so terrifying, since that is about all that drives him. The ending of the film is simply magnificent, and I have to say out of all the movies I've seen, this one features the best finale to a film that I can recall. It is intense, beautiful, stirring, and ultimately tragic but perfectly executed - I'm moved everytime I see it, and that's a testimony to the movie's ability to harness its power even after all the times I've viewed it. The score is also the best of the films I've seen - what a soaring soundtrack. Without question Michael Mann's best film, and one of my all-time favorite movies.

A romance hiding in an adventure story posing as classical literature ... Day Lewis is up to the task as a white man bred amongst savages and nobler for it: "Me no lie!" Stowe breathes heavily in response. A good score and lush visuals aid the proceedings.

"The Last of the Mohicans" has many things going for it, with powerful acting and a story that is just good enough to make the overall impact great. This film takes place during the mid 1700's when the war between the French and The Indians was underway. It follows one man (Hawkeye) who leads his tribe and falls in love along the way. At times, this film feels more like a love story that is complimented with war scenes, rather than the other way around. I did find myself a bit bored at times, but by the end of the film I appreciated everything and I had a great time. The visuals are great for 1992, the acting is superb, the dialogue is very sharp, and the action does not disappoint, although there could have been a little more and the pacing could have been handled a little better. "The Last of the Mohicans" is a very very good war film and that is a lot coming from me. I have never been the biggest "war" fan!

A classic story, but a very 90s cinema epic, with sweeping American vistas and a soul-filling grand celtic sounding orchestral soundtrack. Colonial America seemed like a very dog-eat-dog world and the screenplay fails to add more meaning to the characters' lives. It remains an enticing historical account though of the days of much more gentlemen-like wars. I can see its influence on later movies, particularly Jackson's LOTR (Hawkeye chasing Magua, chould easily be replaced by Legolas chasing the Orcs).

The Last of the Mohicans Quotes