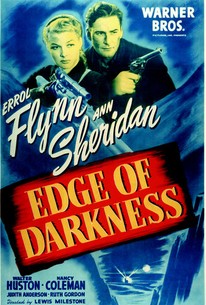 The Norwegian resistance to the Nazi occupation of their country inspired several wartime films from Hollywood, including this Warner Bros. production, filmed in and around Monterey, California. In October 1942, a German observation airplane discovers a seaside village named Trollness where the Norwegian flag is flying over the town square. A ground patrol discovers an empty town littered with corpses, including a number of Nazi officials. The story of the massacre is told in flashback. Errol Flynn plays Gunnar Brogge, a fisherman engaged to Karen Stensgard (Ann Sheridan), whose father, Martin (Walter Huston), is the village physician. Gunnar and Karen are working to undermine the Nazis. The town is divided, with the minister leading a contingent which believes that violence, even against the sadistic Germans, is morally wrong. Karen is concerned about the imminent arrival of her brother, who is known to be friendly to the German occupiers; she fears he may learn of plans by the British to deliver a supply of guns to the resistance. The Nazi commandant, Captain Konig (Helmut Dantine), keeps up the pressure to learn of any opposition to his administration, eventually deciding to execute a selected number of the villagers to force someone to reveal the extent of the resistance's schemes.

Critic Reviews for Edge of Darkness

There are no critic reviews yet for Edge of Darkness. Keep checking Rotten Tomatoes for updates!

Audience Reviews for Edge of Darkness

There are no featured audience reviews yet. Click the link below to see what others say about Edge of Darkness!