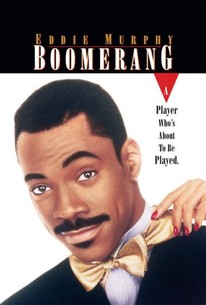 Louise Vyent
as Woman From Holland

Andre B. Blake
as Waiter

In Boomerang Eddie Murphy straitjackets himself in an ill-fitting comedy vehicle that's desperately in need of a reality check.

The general idea is to exploit a certain amount of role reversal, and Reginald Hudlin, who directed House Party, does a fairly good job of making this fun.

The film is far too slick to be ineffective, but its attempts to play with the sex-war theme are often unbelievably crass.

There's something paradoxical about the ease he radiates in playing a man who is supposed to be a smashing success. As an underdog, Mr. Murphy worked much harder.

For all the sex talk in Boomerang, there's very little nudity. The only thing naked is Murphy's vanity.

Murphy gives his most appealing performance to date, using his smug, self-satisfied, sly smile as a joke on his own well-known screen persona.

It's a basic story, but at the same time, this is an all-Black story.

I enjoyed it. It was a half hour too long...but I thought it was funny, charming, and it reminded me how much I like Eddie Murphy.

A star vehicle and, with a return to form, Eddie Murphy has the juice to carry it.

Sometimes the scenes so wrench continuity that it seems a wrong reel has been slipped in.

An attempt at a more sophisticated, grown-up comedy for Murphy, focusing on adults in a workplace, and on adult, sexual relationships.

The cop-out conclusion doesn't dilute the playfulness the Hudlins are always interested in providing. I only wish they had the opportunity to work with Murphy again.

90's romantic fluff starring Eddie Murphy as a serial womaniser. The highlight for me was Eartha Kitt and also Robin Givens (is it just me, or does she seriously look like Reese Witherspoon here?! I do realise how crazy that sounds, but there is definitely a resemblance in the face and the mannerisms!). The movie is nothing special, but I did laugh at a few bits (mostly Eartha) and it is a reasonably okay use of an hour and a half.

Eddie Murphy in a romantic comedy about a womaniser falling for his superior boss.

pretty funny flick about a guy with a mac daddy vibe