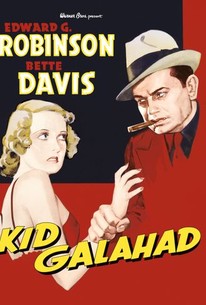 Fight manager Nick Donati (Edward G. Robinson) has just lost his best fighter to crooked promoter Turkey Morgan (Humphrey Bogart). During a party at Donati's apartment, a bellhop (Wayne Morris) kayos Morgan's boxer, who has insulted the honor of Donati's girlfriend, Louise "Fluff" Phillips (Bette Davis). Sensing a good thing when he sees it, Donati takes the bellhop under his wing, promoting the erstwhile pugilist as Kid Galahad. Morris is shipped to Donati's farm for training, where he falls in love with Donati's sheltered kid sister, Marie (Jane Bryan). Angered at this, Donati sets up Kid Galahad for a fall, ordering him to take a dive in an upcoming bout and betting his bankroll on Morgan's boy. Kid Galahad takes a terrific beating until, at the urging of Fluff and Marie, he abruptly changes his ring strategy. When Galahad wins, Morgan, feeling he's been double-crossed by Donati, shoots the latter. Morgan manages to fatally wound Morgan before expiring himself; as he breathes his last, he gives his belated blessing to Galahad and Marie's romance. To avoid confusion with Elvis Presley's 1962 remake of Kid Galahad, the earlier film was retitled The Battling Bellhop for TV. ~ Hal Erickson, Rovi

Veda Ann Borg
as The Redhead

I. Stanford Jolley
as Ringsider

Ralph Dunn
as Reporter at Dinner

Virginia Dabney
as Girl at Party

Don DeFore
as Ringsider
View All

The popular film became a boxing classic for the 1930s.

Kid Galahad is just an okay boxing movie when you consider the talent involved. Edward G. Robinson seems to be just kind of... there and Humphrey Bogart merely turns in a canned Murderer's Row performance. Bette Davis plays a forgettable role but considering she's never looked better, I didn't mind. Kid Galahad definitely doesn't fall into the essential viewing category but if you're on an Edward G or Bogie kick that just won't die, its not a bad way to chase the dragon...

This movie brings the words quaint and sentimental to mind. This movie combines elements of romance and sports drama in a nice way, but it was too nice I think, it could have been more realistic. In other words more conflict. Good, but it could be better.

despite bogie, edward g and bette davis, the film is just ok. the usual boxing cliches...anyway it's gotta be better than the musical remake with elvis :p

Excellent fight picture with Edward G and Bette working well together, her role, Fluff, seems atypical for Davis but its nice to see her in something a little different and of course she infuses the part with her customary grit.