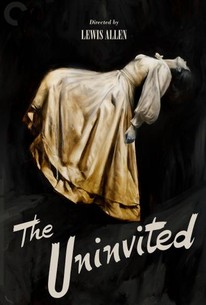 The Uninvited is one of the rare Hollywood ghost stories that does not cop out with a "logical" ending. In fact, the film has more in common with British ghost tales of the period, in that the characters calmly accept spectral visitations as though they were everyday occurrences. Roderick Fitzgerald (Ray Milland) and his sister, Pamela (Ruth Hussey), buy a house on the Cornish seacoast, never suspecting that it is a "bad" house, subject to haunting. Before long, Roderick and Pamela are visited by Stella Meredith (Gail Russell), whose late mother, it is said, is the house ghost. It is further supposed that the ghost means to do Stella harm. Stella's grandfather Commander Beech (Donald Crisp) is close-mouthed on the issue, but it is clear he knows something that he isn't telling. Sure enough, there is a secret to the manor: it is inhabited by not one but two ghosts, one of whom is merely trying to shield Stella from harm. Once the film's deep dark secret is revealed (courtesy of a virtuoso "mad speech" by supporting actress Cornelia Otis Skinner), Roderick is able to single-handedly exorcise the estate and claim Stella as his bride. Based on the novel by Dorothy Macardle (with a few uncredited "lifts" from Daphne du Maurier's Rebecca), The Uninvited remains one of the spookiest "old dark house" films ever made, even after years of inundation by computer-generated special effects. Less effective was the 1945 sequel, The Unseen, which starts well but degenerates into a substandard murder mystery.

Evan P. Simpson
as Will Hardy

Critic Reviews for The Uninvited

For modern audiences, the movie is more elegantly creepy than truly scary, but it still charms.

The one thing -- and the only thing -- about this film is that it sets out to give you the shivers -- and will do so, if you're readily disposed.

The real strength of the film, though, is its atypical stance part way between psychology and the supernatural, achieving a disturbingly serious effect.

An archetypal 40s ghost story, ambitiously decked out in high studio finery, with billowing curtains and other kinds of hyperromantic kitsch that can put you in mind of death by tuberculosis, though ultimately it's a bit of a letdown.

Brought to the screen with mastery... by its director who knows to keep the viewer restless and anxious. [Full review in Spanish]

Its thrills and chills are little frissons that tickle the imagination instead of grabbing by the throat.

This proves to be more than just a ghost story, as the twists turn it into a full-blown mystery that stirs up memories of Alfred Hitchcock's Rebecca.

a serious-minded, visually elegant chiller with real dramatic weight that was destined to stand apart

The Uninvited was...one of the first films to treat the supernatural seriously, and to play ghosts and hauntings as something other than fodder for comedy.

[T]here's some genuinely spooky stuff here, the wailing sobs that wrack the seaside house on the gloomy cliff and all...

Audience Reviews for The Uninvited

An large abandoned home on the stormy and mysterious English coast is the setting for this leisurely stroll into the supernatural as a curious team (brother and sister, do ya get that in films much?) stumble into a old unbelievable claim of the house being haunted. It can't be true, it just can't be. And that's just one reason why this is a decent flick, as it begins by embracing the doubt we all feel when the subject of ghosts come up ... before a slow descent into unknown territory. The thing moves right along too, w/o the draggy feel films this old usually have, and though the script is convoluted it ties together at the end okay. Wait for the twist, it's pretty good.

Part ghost story and part who-dunnit mystery, 1944's "The Uninvited" takes the mind into the musty basements and cobwebbed corners of the dark unknown. Ray Milland and Ruth Hussey star as a brother and sister who stumble upon a great, abandoned seaside mansion on the English coast and quickly (or rather impulsively) decide to buy it. The owners, old commander Beech (Donald Crisp) and his granddaughter Stella (Gail Russell) seem to have very differing opinions of the old mansion and it's prospecive buyers, and it becomes all to clear there's more to the situation than meets the eye. The upstairs artist' studio, for example, has an air of depressing dankness in spite of it's great windows and spectacular view. There's also the matter of the mysterious cold draft that sets the hairs on the back of your neck on edge, even as it carries the scent of flowered perfume. It's here that the movie works most effectively, as characters squint and peer into impenetrable darkness, so we too in the audience do likewise, hoping to catch some glint off the tv screen as to what it is that menaces the young Stella and her friends. The Uninvited is very much a film of it's time, in that it never gets too dark or sinister. However, things like ouiji boards and seances are given quite effective use in the film. "The forces at work here are dangerous", and it's true. But what's more dangerous: hauntings and ghosts, or their effect on the human psyche? This film is more along the lines of "The Ghost and Mrs Muir" or perhaps even "The Thin Man" in terms of feeling and quality. Even though there are plenty of light-hearted 1940s moments, I can't deny the eeriness of this film.

The Uninvited has been right at the top of my must see list for years now and any film with that amount of build up is liable to disappoint; but that is not the case with this film, as The Uninvited really lives up to it's billing as one of the best ghost stories ever committed to celluloid! The film works because it is not over reliant on any one element of it; there's enough human drama to be interesting but not overbearing while the story is important but doesn't get in the way of the drama and this is all wrapped up in a thoroughly foreboding atmosphere. The plot focuses on an old house by a cliff side. Brother and sister(!) Roderick and Pamela Fitzgerald take one look at the house and fall in love with it instantly and after speaking with the house owner, a Commander Beech, agree a price to buy the house. The deal is initially unwelcome by the Commander's granddaughter Stella as it was once her mother's house, who died when she was three years old. However, she soon starts up a friendship with the brother and it's not long before they realise that something is not quite right with the house. The film is directed by Lewis Allen and he does a really good job with it. Much of the film takes place at night and this allows him to deliver a thoroughly chilling atmosphere and the way that the house is soaked in shadows is creepy in the extreme. The characters walk around with only candles to light the way and this fits in very well with the blood curdling screams of the unseen phantoms! The film stars the great Ray Milland, and he delivers a great performance; owning the screen with a charismatic swagger and helping to keep things interesting. The film also stars the beautiful Gail Russell as the love interest. The ghost plot almost takes a backseat at times to the developing love story between Milland and Russell's characters, but this is not a problem since the film always remains intriguing. The ghost story is not particularly complex but it has more than enough about it to carry along the film and the atmosphere. It all boils down to a suitable ending and overall this really is a brilliant little ghost story and one that should be a must see for all horror fans!