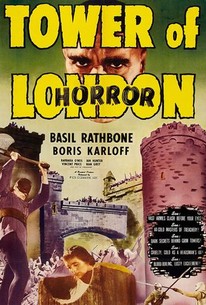 Basil Rathbone's real-life son, John Rodion, has his head chopped off early on in this historical melodrama often mistakenly referred to as a horror film. Yes, a second-billed Boris Karloff does stomp about on a club-foot as the Duke of Glouchester's chief executioner, Mord, but Karloff's presence is really more colorful than horrifying. Rathbone is the main villain here, as the Duke of Glouchester, the deformed second brother of Edward IV (Ian Hunter), whose throne he covets. But before he can place himself on that exalted chair, there are quite a few relatives and pretenders to be rid off. The exiled Prince of Wales (G.P. Huntley) is dispatched during a battle, and his father, the feeble-minded Plantagenet King Henry VI (Miles Mander), who steadfastly refuses to gracefully die of old age, is murdered by Mord. Half-brother Clarence (Vincent Price), meanwhile, is drowned very picturesquely in a vat of Malmsey wine and when Edward IV dies of natural causes, only his two young sons remain. To the horror of Queen Elizabeth (Barbara O'Neil), Glouchester is named their protector -- which of course means that Mord the executioner will be working overtime once again. But the evil duke, now Richard III, has not counted on the heroic John Wyatt (John Sutton), who, by looting the treasury, is able to bring back from exile in France yet another pretender, Henry Tudor (Ralph Forbes). The latter's invasion proves victorious at the famous battle of Bosworth Field and the brutal reign of Richard II, and his executioner, comes to an end.

Boris Karloff
as Mord the Executioner

Vincent Price
as Duke of Clarence

G.P. Huntley
as Prince of Wales

Donnie Dunagan
as Prince Richard as a Child

Louise Brien
as Ladies in Waiting

Jean Fenwick
as Ladies in Waiting

Reginald Barlow
as Sheriff at Execution

Critic Reviews for Tower of London

Corman worries about "embracing" all his sequences in an elegant way. [Full Review in Spanish]

Tower of London won't be confused with Shakespeare, but it's a fairly diverting historical epic.

Makes for pretty compelling entertainment. Just don't take it for anything like historically accurate

Audience Reviews for Tower of London

Tower of London is a quasi-horror movie that is set in the medieval times; the movie follows the rise of King Richard III who took his seat on the throne by systematically killing everyone ahead of him. The film has some stellar performances from Basil Rathbone and Boris Karloff, and we even get a young Vinny Price as the timid Duke of Clarence. The movie is historically accurate, but of course it embellishes to shock and entertain. The movie is pretty epic and its battle sequences are heralded as some of the greatest ever made; there have been two remakes of this film and instead of reproducing the battles scenes these remakes actually reused the battle footage from this movie. This movie is strange in the fact that it uses drama to get the "horror" point across. The movie is in no way scary, but I can see how it may have been in the past. There are numerous murders committed by "The Executioner", played by Karloff, but the creepiest part is that 35 year old Richard III has a doll house with figurines that represent everyone who stands in his way. When he has the Executioner kill someone, he removes a doll and throws it in the fire. The movie shows various ways of medieval death, usually at the hands of the Executioner. The deaths are, however, very tame by todays standards. It is hardly scary and doesn't really have any stand out scenes that stuck with me. In fact I don't see myself watching this movie ever again. Like I said above, the acting is great, but the content is too bland. For all of its heights (there are a few) and for all of its lows (the majority of the film) the movie pulls in an even score of 4 out of 10. You may want to watch this movie if you are really into historic horror movies, or horror movies with no supernatural element, or fans of Vincent Price; but this movie made me want to fall asleep. You're a God to Me! S!D

I really like this movie, it has many great actors, a good horror story, and I like the ending. I highly recommend this movie. I also like the remake from the 60s, watch Vincent Price's part in both movies, it's really funny.