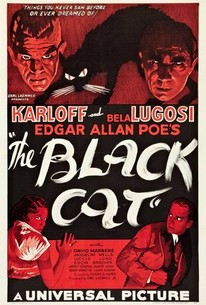 Critics Consensus: Making the most of its Karloff-Lugosi star pairing and loads of creepy atmosphere, The Black Cat is an early classic in the Universal monster movie library.

Critics Consensus: Making the most of its Karloff-Lugosi star pairing and loads of creepy atmosphere, The Black Cat is an early classic in the Universal monster movie library.

Critic Consensus: Making the most of its Karloff-Lugosi star pairing and loads of creepy atmosphere, The Black Cat is an early classic in the Universal monster movie library.

The first cinematic teaming of horror greats Boris Karloff and Bela Lugosi is a bizarre, haunting, and relentlessly eerie film that was surprisingly morbid and perverse for its time. Peter (David Manners) and Joan Allison (Julie Bishop) are honeymooning in Budapest when they meet mysterious scientist Dr. Vitus Verdegast (Lugosi) aboard a train. When the trio's bus from the train station gets into an accident, the young couple accompanies Verdegast to the castle of the spectral Hjalmar Poelzig (Karloff), an architect and the leader of a Satanic cult. Poelzig's treachery in World War I caused the deaths of thousands of his and Verdegast's countrymen, as well as Verdegast's own internment as a prisoner of war. While Verdegast was detained, Poelzig married first his wife, who later died, then his daughter. Now Verdegast has come back for retribution, and the honeymooners are trapped in the two men's horrifying battle of wits. Corpses preserved in glass cases, frightening Satanic rituals, and a climactic confrontation in which one of the characters is skinned alive add to the film's pervasive sense of evil and doom, along with the stark black-and-white photography by John Mescall that makes Poelzig's futuristic mountaintop mansion even more disturbing. Karloff and Lugosi are both excellent, with Lugosi doing a rare turn as a good guy, albeit one who has gone off the rails. Having little to do with the Edgar Allan Poe story of the same name, The Black Cat has grown in stature over the years and is now widely regarded as the masterpiece of director Edgar G. Ulmer and one of the finest horror films ever made. ~ Don Kaye, Rovi

Rodney Hildebrand
as Brakeman
View All

News & Interviews for The Black Cat

View All The Black Cat News

Critic Reviews for The Black Cat

A dismal hocus-pocus which seems to confuse its actors as much as it fails to frighten its audience.

Story is confused and confusing, and while with the aid of heavily-shadowed lighting and mausoleum-like architecture, a certain eeriness has been achieved, it's all a poor imitation of things seen before.

Ulmer never again had the budgetary resources granted him by Universal (at the time, Karloff and Lugosi were two of the studio's biggest stars), and he makes the most of them.

More foolish than horrible. The story and dialogue pile the agony on too thick to give the audience a reasonable scare.

Sumptuously subversive... one of the very best horror movies Universal ever made.

The interplay between Karloff and Lugosi is mesmerizing.

This bizarre, utterly irrational masterpiece, lasting little more than an hour, has images that bury themselves in the mind.

This timeless classic is a testimony to the craft of director Edgar G Ulmer before his career lurched into the quickie arena.

A magnificently eerie entry from the early days of Hollywood horror.

No monsters but lots of atmosphere, this is a classic of the genre.

Audience Reviews for The Black Cat

"The Black Cat" was the first film to pair the legendary stars Boris Karloff and Bela Lugosi, and at just 65 minutes in length, it packs quite a bit of oddness into it's short running time. A young couple (David Manners and Julie Bishop) are honeymooning in Hungary (of all places). Traveling by train, they share a compartment with Dr. Vitus Werdegast (Lugosi), a psychiatrist on his way to visit an old friend. This old friend, Hjalmar Poelzig (Karloff) is an architect who has built a futuristic mansion on top of an old battlefield/graveyard. Poelzig betrayed Dr. Werdegast during WWI, and Werdegast spent several years in a prison there (he was betrayed possibly so Poelzig could steal his wife away), and now returning, Werdegast swears revenge. Throw some satanism into the works and there you have it. Karloff's Hjalmar Poelzig is quite a unique and sinister character, and Lugosi's doctor, with his bizarre cat phobia (whenever he sees a cat, he must either try to murder it or throw his hands over his eyes in terror) is equally odd. While the credits might acknowledge Edgar Allen Poe's original story, there is little here to resemble it. What we have is a strange and well, unique contribution to the horror genre of the 1930s.

A young couple find themselves caught between the machinations of a doctor bent on revenge (Bela Lugosi) and a mad engineer (Boris Karloff) in the latter's Art Deco mansion, built on the graves of the soldiers he sold out in a World War I battle. The story's a little ragged (with a black cat popping up at random moments to terrify Lugosi), but Edward G. Ulmer's direction, the geometric sets, and the atmosphere of elegant perversity inexorably draw you in to the Expressionist nightmare.

A couple Peter and Joan Allison are joined by Dr. Vitus Verdegast (Bela Lugosi) who are on their way to a hotel, but suddenly their bus crashes during a storm. Dr Verdegast suggests they seek refuge in Hjalmar Poelzig's (Boris Karloff) house, who is an old acquaintance of his and he's secretly seeking revenge against him for the death of his wife and betraying his country by slaughtering his entire army when it was sacrificed to Satan during WW1. Dr Verdegast discovers that Poelzig has the same idea for Joan, which saw him kill his wife. So to help them escape Dr. Verdegast challenges Poelzig to a game of chess and if he wins they are free and if he doesn't their doom. Incredibly complex and odd assortments of novelties ranging from Sadism, Superstition to Satan worship fill this stylish yet confusing film. I wasn't particularly gob smacked or incredibly impressed by the film after reading a lot good things about it, but it's the performances and the look of the film that kept me glued and amazed. The plot had an engrossing set up, but the story just didn't compliment it, as it could have been far more interesting than it was. It jumps here to there without real cohesion and becomes rather thin in detail, but there are some surprising revelations along the way. The dialogue on the other hand was rather fine, if too much of it. There was a lot of conversations than actual action or lively scenes. The distinction between Dr Verdegast and Poelzig is pretty even in power and determination to rid each other. With them tossing back and forth sharp and intense dialogue to get the upper hand. All of this mayhem between them leads to a greatly energetic tussle between the two stars. The set-up is a slow-grinder to begin with, though there are interesting ideas that pop up throughout the film. The reasonably slow dramatic 45-minutes suddenly picks up the pace and energy levels for the last thrilling and involving 15-minutes, which alone is good reason to watch it. This is when Satanists and sacrificial ceremonies fill the story. There is a brilliant climax involving a skinning that is implied to great effect and a big explosion to end it all. The ironic ending was fairly convincing and enjoyable in tying up the film. It's definitely Lugosi's best performance that I've seen( I wasn't a fan of his version of "Dracula") It was a good change to see him playing a good guy and a much more controlled and subtle character than his eccentric roles. Boris Karloff comes across rather menacing and quite callous in appearance. His body language is impressively noticeable and imposing in creating terror. From his dead looking facials and soft spoken voice really added to the unease. Julie Bishop and David Manners as the couple were fine in their performances. This is impressively atmospheric and holds such a great awe to it all. The modernistic cold domain of Poelzig's castle truly stands out, with the spiral staircase, sliding doors, the dark dungeon and curvy interior. There is such great composition with lighting and solid camera-work captures the elegance and style of the scenery beautifully. The soaring score takes hold and sometimes it got rather distracting for me. As I kept trying to figure out where I heard the score from before. Overall, "The Black Cat" is a very good mood piece and holds such great performances, it's a weird and wonderful film that is highly entertaining.