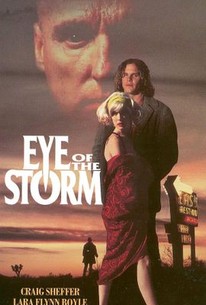 Eye of the Storm is the eerie and tragic story of two brothers haunted by their past. Steven (Bradley Gregg) witnesses the murder of his parents by robbers. Running from the killers, Steven falls from a window and is blinded. Ten years later, Steven and his brother Ray (Craig Sheffer) are managing the motel, that was owned by their parents. Marvin (Dennis Hopper), a drunken redneck, and his gum-chewing wife Sandra (Lara Flynn Boyle) check in with tragic results for all as their lives become entwined. Despite many implausible plot twists, director Yuri Zeltser puts all this together to produce a compelling thriller and gets strong performances from his cast, particularly Gregg, who is very convincing and poignant as the blind, younger brother. Eye of the Storm, given a theatrical release in Germany but released straight to video in the United States, is a small, well-made thriller, well-worth viewing.

Critic Reviews for Eye of the Storm

There are no critic reviews yet for Eye of the Storm. Keep checking Rotten Tomatoes for updates!

Audience Reviews for Eye of the Storm

After reading the description, I couldn't wait to watch the movie.I was completely disappointed when it was lame from start to finish.For some stupid reason, I tortured myself & tried to watch it all but I just couldn't make it to the end

Eye of the Storm Quotes