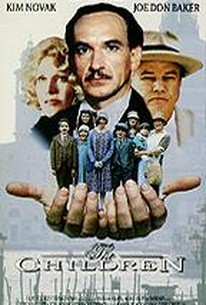 Ben Kingsley stars in this solid adaptation of the Edith Wharton novel (filmed previously in 1929 as The Marriage Playground). Kingsley plays Martin Boyne, an engineer in 1920s Europe who, after five years of correspondence, is planning to travel overseas to marry the recently widowed Rose Sellars (Kim Novak). On his way to marry Rose, he stops off in Venice to visit his old friend Cliffe Wheater (Joe Don Baker), who with his wife Joyce (Geraldine Chaplin) has a large group of children. Rose then contacts Martin, telling him that due to complications arising from her husband's will, he should wait another year before marrying her. Meanwhile, Cliffe and Joyce's fifteen-year-old daughter Judith (Siri Neal) arrives at Rose's door with the younger children. Because of marital problems, the children convince Martin to become their guardian. But Martin, spending too much time around Judith, ends up falling in love with her. Tongues begin to wag and Rose, crestfallen, leaves for France. Martin and Rose split up and Martin disappears in shame, trying to get control of his life and all that he has lost. ~ Paul Brenner, Rovi

Terence Rigby
as Duke of Mendip

Edward Michie
as Chippo
View All

Critic Reviews for Children, The

There are no critic reviews yet for Children, The. Keep checking Rotten Tomatoes for updates!

There are no featured reviews for Children, The at this time.