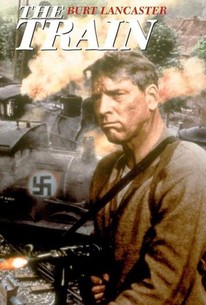 John Frankenheimer directs Burt Lancaster in the tense spy thriller The Train. Lancaster plays Labiche, a French railway inspector. Allied forces are threatening to liberate Paris, so Col. Franz von Waldheim (Paul Scofield) is ordered to move the priceless works of art from the Jeu de Paume Museum to the fatherland. The head of the museum (Suzanne Flon) attempts to convince Labiche that he should sabotage the train on which they are transporting the art. Labiche is more focused on destroying a trainload of German weapons. After his friend is killed trying to stop the train with the art, and after a consciousness-raising conversation with a hotel owner (Jeanne Moreau), Labiche resolves to save the antiquities. Lancaster and Frankenheimer had worked together previously on both Birdman of Alcatraz and Seven Days in May. ~ Perry Seibert, Rovi

Max From
as Gestapo Officer

Critic Reviews for The Train

Lancaster half ruins his performance with innocent sincerity, but at that point where the script stops and Lancaster has his task before him, he sinks into it with a dense absorption.

Here is a movie that is melodrama about sabotage in World War II, but which looks like a documentary in its attention to detail; which has fine actors in strong portrayals but in which action and movement are more important than the acting.

A ripping system of motion, at once streamlined spectacle and thorny moral quandary

The Train is a lesson in focusing on the most essential, forward-moving elements and throwing everything else away.

It's simple stuff -- finely wrought entertainment -- but on its own merits, it works.

For a film with such an illogical premise, The Train manages to be a top-rate WWII thriller that's held up well.

A landmark picture in terms of its breakneck, antic, physical ambition--the marriage of that hell to the heaven of its gravitas something that marks Frankenheimer's best films.

Plays as a homage to the French Resistance.

How do you weigh the cultural heritage of a nation against the value of human life? A wholly persuasive, intelligent thiller crisply directed by Frankenheimer.

Audience Reviews for The Train

Where did this beautiful golden nugget come from? I'd never heard of it before. The damnable Nazis (again!!!) are stealing all the major art, the pride of France, right out of Paris, and the only thing standing in their way is the overmatched, overstressed, overwhelm French Underground. They've got more important things to get to on their plate too, but eventually are persuaded to see the art as more than simply decoration, and perhaps more important than guns, planes and even trains. What's Burt Lancaster doing in here then? Bad casting, but foiled but Lancaster's gravitas as a French railwayman fighting for the Resistance. So good, this film, so good. Jeanne Moreau is under used as only a love interest. Paul Scofield is perfect as the gentleman Kraut psychotic, one of only two people in the film who "understand" how important the art actually is, other than simply as a financial return.

Exciting story based on actual events in the resistance to Nazi occupiers during WWII. Good performance by Lancaster. Definitely worth seeing if this has somehow slipped under your radar.

Don't you just love the way Burt Lancaster always plays Burt Lancaster, no matter the circumstance, the setting or even the nationality of the character? What would be a detriment to most other actors seems to only strengthen his popularity. Here, in this classic WWII drama, Lancaster is a "FRENCH" engineer in charge of the railroad traffic in and out of Paris. He is also covertly intent on sabotaging the occupational German army every chance he gets. While those around him, be they French or German, speak with fluid accents, Burt never waivers from his trademark American dialect. The best part is that we, his legions of adoring fans, don't seem to mind one bit. It's not the words that fuel his performance, it's the emotion behind them. In The Train there is no actor less French than Burt Lancaster, and yet I can't imagine anyone better suited for the part.