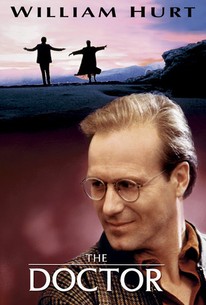 A doctor finds out the hard way that there's more to medicine than skill in the operating theater in this emotional drama. Jack McKee (William Hurt) is a gifted but arrogant surgeon who cares little about the emotional welfare of his patients and is little more than a benign stranger to his wife Anne (Christine Lahti) and his son Nicky (Charlie Korsmo). Jack has been suffering from a nagging cough for some time, and when he begins coughing up blood one morning, he finally allows another doctor to take a look at him. The doctor discovers that Jack has a malignant tumor in his throat that could rob him of the ability to speak, or even kill him. Suddenly, Jack is a patient instead of a doctor, and he learns first hand about the long stretches in the waiting room, the indignity of filling out pointless forms, and the callous attitude of the professional medical community. Jack also gets to know June (Elizabeth Perkins), a terminal cancer patient whose joyous embrace of life as her time draws to a close is an inspiration to him. Restored to health, Jack is determined to be a more caring healer and strives to be a better husband and father, but his new lease on life also earns him an enemy in fellow surgeon Murray (Mandy Patinkin), who wants Jack to lie under oath for him in a major malpractice case; and a new respect for Eli (Adam Arkin), an ear-nose-throat man he used to ridicule for his empathetic treatment of his patients. The Doctor was based on the memoir of real-life surgeon Ed Rosenbaum, entitled "A Taste of My Own Medicine."

Jeris Poindexter
as Doctor in Hallway

Critic Reviews for The Doctor

The Doctor is that rare specimen--a big studio movie that treats the audience (and its own characters) with intelligence and respect. It cuts close to the bone.

In the wrong hands, this material could have been simply a cautionary tale, but Hurt and his director, Randa Haines, who also collaborated on Children of a Lesser God, make it into the story of a specific, flawed, fascinating human being.

The Doctor is a shrewd and serious piece of work.

[Christine Lahti] is capable of bringing great depth to any part. But how do you plumb a petri dish?

An honest, well-acted and very moving drama about a cold, arrogant surgeon (a terrific Hurt) who learns about compassion when he becomes a cancer patient.

Gives a fresh appreciation of the dynamic interplay between mind, body, and soul in the art of healing.

Audience Reviews for The Doctor

William Hurt gives his usually strong performance as a doctor who learns the errors of his bed manner ways by becoming sick himself. It meanders into over sentimentality at the end however.

Hurt. Nuff said. He's simply brilliant here, perfectly cast and at the top of his game. Which is a good thing, seeing as he's pretty much carrying the whole film on his own. While the film does border on the melodramatic, some moments really stuck with me. Our entire med class watched this together and the immediacy really hit us hard. It's believable. You can see yourself falling into those habits of negligence or over-working yourself. All I can say is that if you're in a health-related field, this is pretty much required viewing. Thanks, Will. :)

Superb film, Hurt is brillaint as the egotistical surgeon and his fall from grace is touching and extremely well done.

Great doctor jokes and theme of karmic retribution, but a little gaggy all throughout. I rather liked William Hurt in this performance though. Funny/ironic how he played a man teaching deaf students to speak in "Children of a Lesser God" and a man who can't speak (temporarily) in this film (both directed by Randa Haines). Teehee.