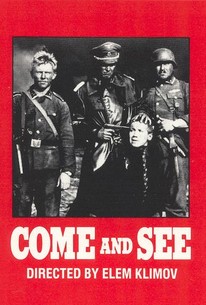 Critics Consensus: As effectively anti-war as movies can be, Come and See is a harrowing odyssey through the worst that humanity is capable of, directed with bravura intensity by Elem Klimov.

Critics Consensus: As effectively anti-war as movies can be, Come and See is a harrowing odyssey through the worst that humanity is capable of, directed with bravura intensity by Elem Klimov.

Critic Consensus: As effectively anti-war as movies can be, Come and See is a harrowing odyssey through the worst that humanity is capable of, directed with bravura intensity by Elem Klimov.

As seen through the eyes of teen-aged protagonist Alexei Kravchenko, the landscape of Byelorussia is devastated by the incursion of Nazi troops in 1943. The genocide perpetrated on the citizens of this region is almost secondary to the rape of the region itself. Despite his disillusionment with humanity, Florya (Kravchenko) emerges from his experiences vowing to survive no matter what comes -- and in so doing, personifies a resilience and dignity. Come and See, originally released as Idi i Smorti, was the winner of the Grand Prix at the 1985 Moscow Film Festival.

News & Interviews for Come and See (Idi i smotri)

View All Come and See (Idi i smotri) News

Critic Reviews for Come and See (Idi i smotri)

I have rarely seen a film more ruthless in its depiction of human evil.

I suppose that never forgetting has its place, but not when it insists on such narrowly righteous fantasies of revenge.

Come and See, the last and most notable film made by the former Soviet director Elem Klimov, is another fusion of popular and vanguard styles, albeit put to more civic-minded use.

A disorienting and undifferentiated amalgam of almost lyrical poeticism and expressionist nightmare.

Scene for scene, Mr. Klimov proves a master of a sort of unreal realism that seeks to get at events terrible beyond comprehension.

Come and See sounds like an invitation to a child's game. Nothing could be further from the truth.

"A true classic of anti-war cinema".

Perhaps the most terrifying, nightmarish film anyone has ever made about war.

An unforgettable nightmarish vision of excessive violence and cruelty.

Every scene drives home its point, plainly, that man's inhumanity to man is incurable.

a helluva journey, told with with brutal bluntness and numbing, unflinching realism.

Or: Ivan Got His Gun

Audience Reviews for Come and See (Idi i smotri)

By forcing us to follow a series of unspeakable atrocities entirely from the point of view of a naive young boy, making us see what he sees and hear what he hears, this film becomes a horrific nightmare of filtered realism that shocks us even more due to the young actor's deranged performance.

A rare jewel from cinema history, a painful and unforgettable film, a classic by Elem Klimov; Come and See (Idi i Smotri) is a picture that everybody must see.

It's another war film about the victims, but shot with a lot of style, as if it was an operatic nightmare. While the movie starts exploring the character of Florya. the entire second half is nazis killing russians, with a revenge fantasy playing at the end. As a war film it is a crude and direct portrayal of the atrocities of war, but it leaves not much room for anything else, including it's characters.

I don't recall ever seeing a more powerful anti-war film. The transformation of Florya (Aleksei Kravchenko) from an innocent boy into a battle-hardened soldier is something that must be witnessed in order to be fully appreciated.