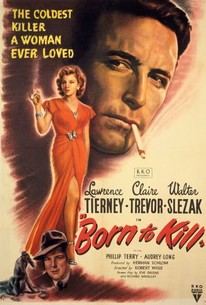 Somehow the titles of the films of hardcase actor Lawrence Tierney seemed to be extensions of the man's personality, as witness such films as The Devil Thumbs a Ride and Born to Kill. In the latter picture, Tierney starts the ball rolling by committing a double murder in a jealous pique. Claire Trevor discovers the bodies, but says nothing to the police; she's leaving town and doesn't want to be impeded. Trevor and Tierney meet and fall in love on the train to San Francisco. Unfortunately, Trevor is married, so Tierney shifts his affections to her sister, Audrey Long (later the wife of director Billy Wilder). He marries Long, though he keeps up his illicit affair with Trevor. When detectives investigating the murders come snooping, they are bought off by Tierney's pal Elisha Cook Jr.--who is then murdered by Tierney, who suspects that Cook is carrying on with Trevor (Cook seldom survived to the end of any of his films). When Tierney finally does face arrest, it's at the instigation of the jealous Trevor, who is shot full of holes for her trouble. Born to Kill was based on James Gunn's novel Deadlier Than the Male. ~ Hal Erickson, Rovi

Critic Reviews for Born to Kill

One of the most acerbic of all films noir, boasting essentially no redeemable characters (or a wealth of deliciously evil villains) while also being utterly enthralling.

Competent if slightly too tame for a supposedly sleazy story.

Hard to watch, but effective and alluring nonetheless.

A revolting B film noir...

Audience Reviews for Born to Kill

Another good film noir, with a very interesting story of murder and romance. Good acting, good story, it's good.

Finally, a noir film where the title actually makes sense! Classic psychopath meets girl love story. If you can find it on DVD be sure to check out the commentary from author and noir expert Eddie Muller. Muller's insight into the character and personality of Lawrence Tierney is priceless. It wasn't so long ago that I couldn't even tell you who Robert Wise was. Now I find myself, like a sponge, wanting to soak up every film he ever directed. If I come across one I dislike I'll let you know.

two ambitious psychopaths hook up and all hell breaks loose. claire trevor is awesome as the soulless manipulator who destroys everyone around her to be near laurence tierney's brutal thug

Lawrence Tierney is superb as the overly-confident pit bull alpha dog sociopath who draws the same rotten qualities out of Claire Trevor who gives an equally jarring performance. Robert Wise's direction is also great as he directs one of the most grisly murders during the golden age of Hollywood. Slezak is great as the private dick and Esther Howard is nothing short of grotesque as his alcoholic client.