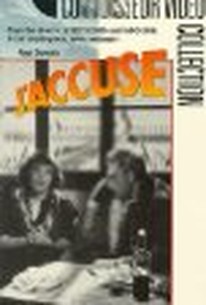 This 1938 sci-fi and horror-tinged war drama from writer/director Abel Gance is an updated remake of Gance's own 1919 silent feature of the same name. J'accuse stars Victor Francen as Jean Diaz, a scientist who, after witnessing the unspeakable horrors of the battlefield during the First World War, dedicated his life to ensuring that history doesn't repeat itself. Diaz eventually invents a device that promises to bring an end to war forever. However, with WWII on the horizon, the government instead opts to use the machine against its enemies rather than for peace. This drives Diaz to the brink of insanity and leads him to resort to more unexpected measures to get his point across. Line Noro and Marie Lou also star. ~ Matthew Tobey, Rovi

Critic Reviews for J'Accuse! (I Accuse) (That They May Live)

An excellent antiwar film, J'Accuse is all the more poignant considering it was produced and released in France shortly before the Occupation.

Audience Reviews for J'Accuse! (I Accuse) (That They May Live)

There are no featured audience reviews yet. Click the link below to see what others say about J'Accuse! (I Accuse) (That They May Live)!

J'Accuse! (I Accuse) (That They May Live) Quotes