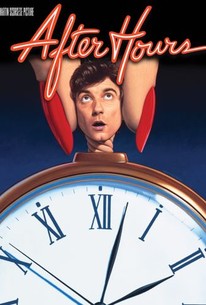 Critics Consensus: Bursting with frantic energy and tinged with black humor, After Hours is a masterful -- and often overlooked -- detour in Martin Scorsese's filmography.

Critics Consensus: Bursting with frantic energy and tinged with black humor, After Hours is a masterful -- and often overlooked -- detour in Martin Scorsese's filmography.

Critic Consensus: Bursting with frantic energy and tinged with black humor, After Hours is a masterful -- and often overlooked -- detour in Martin Scorsese's filmography.

John Heard
as Tom, the Bartender

Will Patton
as Horst

Margo Winkler
as Woman with Gun

News & Interviews for After Hours

View All After Hours News

Critic Reviews for After Hours

It might not make any sense. It might not even matter. But it's a blast while it lasts, and it brings the most perfect of endings along with the sunrise.

That "After Hours" fails to satisfy, that it derails, that even its own director tires of the material halfway through, would disappoint no one if the name of Martin Scorsese didn't appear above the title.

After Hours is dazzling movie making; you could get a giddy kick just from cinematographer Michael Ballhaus' shot as a set of house keys floats down toward the camera, tossed from a top-floor apartment.

Like many of Scorsese's earlier pictures, After Hours has a fascination with the bizarre. But the new film is lighter in spirit than any Scorsese film, with the possible exception of Alice Doesn't Live Here Anymore.

It's his most-un-Scorsese-like film, and it's an overlooked gem.

The result is a delirious and challenging comedy, a postmodern Ulysses in Nighttown.

He never really seems to be in mortal danger so much as mocked and harassed for being so deeply out of place. For many men, however, being made to feel small is a fate worse than death.

The film is riddled with cryptic mysteries, not to mention Cheech and Chong, and it plays as an urbane older brother to David Lynch's psychosexual masterpiece Blue Velvet.

As absurdist angst-ridden comedy, "After Hours" isn't flawless. As Martin Scorsese's way of using art to cathartically shake off bugaboos, exorcise demons and bounce back stronger after major dream-project setbacks, it's its own sort of masterpiece.

The more bizarre and frantic the material, the more I felt the strength and sureness of Scorsese's directorial hand, taming the screenplay's goblins and rendering them harmless.

One of the best self-conscious black comedies to come along in a long time, Martin Scorsese`s After Hours is a film that delivers humor and anxiety like a smack in the face with an amphetamine pie.

It's weird, wonderful and wildly funny.

Audience Reviews for After Hours

Martin Scorsese's After Hours, it's a surreal and great black comedy, with a very good screenplay and actings. A film showing, that even in the most forgotten movie, Scorsese always is terrific.

When it's after midnight in New York City, you don't have to look for love, laughter and trouble. They'll all find you! Great weird film! One of Martin Scorsese's most underrated films. It was made in 1985, and I can already see the techniques Scorsese used in Goodfellas and the quick editing. It is directed and edited really well. So if you were a fan of Scorsese's frantic camera work in Goodfellas and Casino, this film is for you. It really does put you on edge as a viewer, you really want Dunne's character to get back home but everything possible that could happen to him happens. This is not just a evocation of soHo in the early 80's, it is a deeply black comedy. All the rules go out the window for Dunne's character, because after all it is after hours. Overall, however, "After Hours" is an enjoyable film. It is an especially good choice to gain a sense of perspective. Not many ongoing experiences can be worse than the rough night that Paul has in Soho. Watch at own risk! Conjure up an urban world where apparently friendly young ladies all turn out to be somewhere between odd and crazy. Then imagine you're up here to see one such girl and your last bill has flown out of the cab window on the way. Then pretend your date has committed suicide, you've somehow got branded as a serial robber, and another girl is after you with her ice cream van. You could well be Paul Hackett stranded in New York's SoHo in the early hours miles away from your uptown word processing job. You've got some change but since the subway fares went up at midnight, not enough to get back. Who do you call? Definitely not the police.

After Hours is an absolute delight. The theme concerns one night in New York City, and although what transpires could happen in any major metropolitan area, the trappings are distinctly New York. It's funny how Scorsese is able to satirize the city while still celebrating its cosmopolitan atmosphere. The genius is the method in which the action slowly unfolds getting progressively more ridiculous as time goes on. We sense something is amiss right from the very start. Notice how Marcy's roommate Kiki answers the phone when he rings her up. Kiki's disembodied voice dripping with annoyance. That's merely the beginning. His odyssey becomes nightmarish in its development. The brilliance is that he takes the saga to places we don't anticipate. Creatively building layer upon layer of insanity to form a perfectly realized vision of hell on earth. It's hilarious, weird and uncomfortable at once. Throughout it all, Dunne grounds the picture in an air of normalcy that radiates safety for the viewer. And just when you fear that this cruel paean to the Big Apple cannot end in any meaningful way, it does. The story comes full circle intelligently referencing events we've seen before. It's an intricately constructed tale that simply gets better with age.

Paul Hackett (Griffin Dunne) is your average 1980s New York yuppie. One night after work he has a chance encounter with a woman whom he makes a bit of a connection with. A little while later he decides to meet up with her in SoHo. As soon as he starts making his way to the neighborhood though, what should have been a straightforward and simple "date" of sorts turns into a bizarre madcap misadventure where Paul's attempts to get back home get weirder and worse as the night goes on. Plotwise, that's pretty much it: guy goes out, tries to go home, shit hits the fan. The movie is a delightfully odd and darkly funny trip through the nuttier side of urban life in the wee hours of the morning. It's less of a character study, than a study in weirdness propelled by some increasingly ecclectic and odd characters, played by an impressive lineup of performers including Rosanna Arquette, Verna Bloom, Cheech and Chong, Linda Fiorentino, Teri Garr, John Heard, and Catherine O'Hara among others. This is an atypical film for Scorsese, and it seems weird at first having him direct something like this. It's not really his thing, and seems more like the perfect fit for the Coen Brothers. Yet, while watching it, the viewer realizes that, atypical or not, Scorsese is the right fit for such a project because he knows New York, he knows New York at night, and he's great at having movies that have a nightmarish tone filled lots of paranoia and craziness. What makes it stick out is the overall tone, the dark comedy element. This is probably the closest Scorsese will come to making a comedy, even if it isn't a "pure" one per se. I've mentioned some of the actors who play the side characters, but let's diiscuss their performances. They're great. All of them. Dunne excels as playing the increasingly harried and Kafkaesque protagonist Paul, while all the others do a godo job (and have lots of fun) playing all sorts of odd balls whose actions aren't always explained. That's another element that really makes this film sing is that it leaves some things unexplained or untouched, and it works better as a result, and adds to the proceedings instead of being too vague for the sake of too vague. Howard Shore's music is both fun and perfectly fitting of the atmosphere, Michael Ballhaus has done some excellent work as cinematographer for a numebr of Scorsese films, and he adds another one to that list with his work here. The lighting, camera moves, and various neat angles are well executrd and only add to the film instead of being just for show. Thelma Schoonmaker does a great as usual job with the editing, and Scorsese does a terrific job with his directing, proving that, even with a slightly lighter tone than the rest of his work, he can still pull off something spectacular. Give this one a shot. it's weird, nutty, and all kinds of random, but it's hilarious, super entertaining, and extremely well made. Bravo.