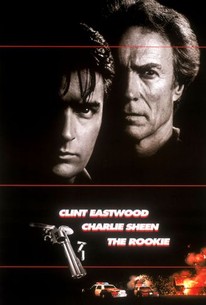 Packing years of experience and a .45 automatic, LAPD Detective Nick Pulovki figures he's got all the help he needs. He's also got all the help he doesn't need. His new partner is The Rookie. Director/star Clint Eastwood is Pulovski. Charlie Sheen is the by-the-book newcomer. Each reluctantly relies on the other to stop a killer-elite gang of auto thieves. Raul Julia, Sonia Braga, Lara Flynn Boyle and Tom Skerritt co-star with the most spectacular action sequences Eastwood has ever filmed (Dave Kehr, Chicago Tribune). A freeway becomes an 80-mph bumper car game. A barrio bar busts open like a giant piñ;ata. The two drive through a wall to escape an exploding buildingfive stories up. Fasten your seat belt.

Seth Allen
as David, as a Child

Critic Reviews for The Rookie

There's even a scene in which Sheen's rich father screams, "I gave you everything you ever wanted!" To which he yells back, "You were never there for me!" Right out of Arthur Miller, isn't it?

Overlong, sadistic and stale even by the conventions of the buddy pic genre ...

Clint's in this car wreck doing his usual macho thing, which might be enough to satisfy his fans.

One of the worst films directed by Clint Eastwood...

Fails miserably to join the ranks of buddy cop classics like Lethal Weapon and 48 hours.

The film offers some disturbingly misogynist elements as well as a healthy dose of crushing violence. Still, those quibbles aside, this is a fun movie and a must-see for Eastwood fans.

The one in which Clint Eastwood gets raped... [Blu-ray]

...pretty disappointing for an Eastwood film, undoubtedly one of the low points of his directing career.

It's not necessarily bad, but it's crushingly routine, delivered without care, and with emphasis only on some expensive-looking chase scenes and stunts.

Audience Reviews for The Rookie

The Rookie is an underappreciated Eastwood film. Its non-stop action with an excellent cast, featuring Eastwood, Raul Julia, Tom Skerrit, terribly dangerous and sexy Sonja Bragga, and Charlie Sheen. With Sheen's infamous notoraity lately, I'm surprised this film hasn't gotten more attention. Sheen, following his Platoon and Wal Street roles is believable here as a blend of naivete and bravado. Eastwood is kind of a surrogate father who "school's him" on street life chasing G-rides. The story is plausible in some places and too dumb in others, but the stunts carry it. Its basically a coming-of-age tale and a standard crime-doesn't-pay tale mostly memorable for the action. The whole "you were never there for me dad" guilt trip over the dead brother subplot was not necessary, but I bought it. I recommend it for Eastwood fans or strictly as an escapst action flick. Lastly, notice Roberta Vasquez at the end as Sheen's new partner. She's a former LAPD officer and Playboy Playmate.

It was an okay movie. And it was nice to see Clint Eastwood actualy do something instead of just stairing into the sun for two hours

First time I've actually seen this uncut it seems as allot of the swearing and violence...err I've never seen before hehe. Clint teams up with a slightly chubby yet fresh faced Charlie Sheen to take down the nasty yet comically dastardly looking Raul Julia in this by the numbers cops v baddies buddie action flick. It shows how my taste has changed as I recall loving this when I was a teen but watching it now it really is quite lame with terrible performances from everyone, Clint is just 'Dirty Harry' again albeit with more humorous dialog and Sheen is just Sheen like he is in every film he's made. We move from setup to setup as the good guys plod along piecing together evidence whilst getting into all manner of outrageous problems and taking various body blows. Lots of shooting n missing, stereotypical bad guy characters and one very good car stunt out of a building and voila! your typical Saturday night takeaway 80's/90's action flick, Sheen for the young and Clint for the old.

Ok, so this isn't exactly a great action movie, nor is it a great character study. It has some charm to it though. The score, first of all, is completely out of a 70's action film, and it must be heard to be believed. Seeing Charlie Sheen destroy a bar is a hoot, as is Clint Eastwood getting "raped." I'm not quite sure why I like because I know it's definitely not perfect, but it's interesting nonetheless. If nothing else to see Sheen and Eastwood do a flick together.