The Tales of Hoffmann1951 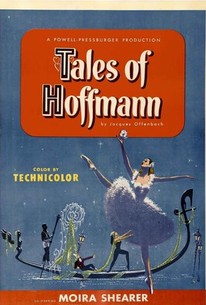 Critics Consensus: Exemplifying the Archers' flair for spectacle and narrative tempo, The Tales of Hoffman is a surreal musical of operatic proportions.

Critics Consensus: Exemplifying the Archers' flair for spectacle and narrative tempo, The Tales of Hoffman is a surreal musical of operatic proportions.

Critic Consensus: Exemplifying the Archers' flair for spectacle and narrative tempo, The Tales of Hoffman is a surreal musical of operatic proportions.

The Tales of Hoffmann Photos

Newly restored version of the 1951 Powell and Pressburger classic, based on the 1881 opera by Jacques Offenbach. An anthology of fantastic and romantic adventures, recounted by the fableist Hoffmann (Robert Rounseville) and featuring Moira Shearer (The Red Shoes), Ludmilla Tchérina, and Ann Ayars. The film has been singled out by both Martin Scorsese and George A. Romero as a major influence on their own work.

Jean Alexander
as Mother [The Tale of Antonia]

Critic Reviews for The Tales of Hoffmann

Most if not all of these performers have since died; here, they live on.

The film will never rank among my favorites in the careers of these filmmakers, but filmmaking legends as diverse as Cecil B. DeMille, Martin Scorsese and George A. Romero all adore it ...

"Hoffmann" is an immersive aesthetic experience best thought of as an art form all its own.

It's a work of hysterical excess and flamboyant extravagance and it feels unlike pretty much anything else you will ever see in a cinema.

You might compare this to the 1948 Powell and Pressburger film The Red Shoes, though in many ways it is even more hallucinatory.

A worthwhile component of Powell and Pressburger's inestimable legacy.

A pinnacle of Technicolor expressionism, The Tales of Hoffmann is one of history's strangest, most sumptuous somethings-you-don't-see-every-day.

The obvious care and effort that have gone into Hoffmann, the sometimes memorably contrived passages of virtuosity in the first half, make one reluctant to insist on the collapse of the work as a whole.

Only the slightly muddled structure detracts from what is otherwise an audacious cinematic experiment.

While the dizzying array of design elements and magnificent vocal performances is impressive, 138 minutes is just too long to keep the interest of any but the pure opera devotee.

Audience Reviews for The Tales of Hoffmann

The famed Powell/Pressburger team bring us an opulent staging of Offenbach's "The Tales of Hoffman," an opera divided into three parts in which the title character tells a tavern about his doomed past loves. The first and longest section, involving Moira Shearer as a life-size doll, is easily the most entertaining and includes cute, no-tech illusions of her body being "disassembled." Otherwise, the stories aren't easy to follow except in the broadest way (a prostitute and magician plot to steal Hoffman's reflection, and an opera singer sings herself to death), because the shrill lyrics are too difficult to discern. Furthermore, only two of the actors do their own singing, and there is an palpable awkwardness with the syncing -- especially when ballet dancers are trying to mouth words as they dance. The best features are Shearer's willowy dancing and Robert Helpmann's mugging as the recurring villain (he'd be perfectly at home in a Fritz Lang silent). And this is Powell and Pressburger, so of course the colors and sets are like magical paintings come to life.

During the first intermission of a ballet in Nurnberg, students and other members of the audience retire across the street to a tavern for a quick beer before Act 2. While there, Hoffman(Robert Rounseville) starts to tell his stories of woe. So compelling are they, that his audience decides to skip the rest of the ballet, with the pipes being broken out, to hear what else he has to say; starting in Paris before the Eiffel Tower was built where he encountered Olympia(Moira Shearer). "The Tales of Hoffman" is a highly entertaining mix of ballet and opera, where Moira Shearer dances her legs off while everybody else sings their hearts out. Visually, Michael Powell and Emeric Pressburger pull out all the stops with the aid of cinematographer Christopher Challis who makes the perfect use of Techicolor for these dreamlike fantasia, each set in a different locale. As such as the movie is about the different expressions of art(Hoffman is a famed poet by the end), these settings also resemble paintings and are works of art in themselves. It is no wonder then that Hoffman gets so lost in them, missing what is right in front of him all the time, the constant companionship of his faithful friend Nicklaus(played by Pamela Brown, thus even adding a bit of genderblending into the equation) through thick and thin.

The Tales of Hoffmann Quotes