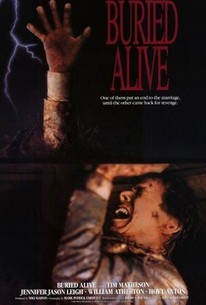 Produced for cable TV, this pedestrian thriller (also known as Till Death Do Us Part) purports to be a riff on Edgar Allen Poe's "The Premature Burial" but actually bears more of a resemblance to Diabolique. It stars Tim Matheson as a cheated-upon husband who can't stay down after his wife's (Jennifer Jason Leigh) unsuccessful attempt to poison him results in his being buried alive. The film's one real moment of horror comes in a claustrophobic sequence where Matheson desperately claws his way out of his coffin. The story then settles into a standard revenge motif, capped with an admittedly potent payoff that, though intriguing, is probably not as shocking as the filmmakers had intended.

One of the network's finest forays into features, even if, on paper, it seems like it would barely have enough plot to fill up a segment in a Creepshow sequel.

A required watch for fans of Frank Darabont, creator of The Walking Dead, if only to see what a difference 20 years can make.

Tim Matheson stars as a working man who's wife (Jennifer Jason Leigh) is cheating on with a doctor (William Atherton). They plan on killing him and they think they succeeded when they heavily drug him. But it wears off when he's underground and buried. He digs himself out and is soon plotting revenge. The movie is better than you'd expect and the performances are perfect. It offers plenty of suspense and it's funny in a dark sort of way.

Bit shocking to see a man returned from dead and buried alive in a cheap wooden box. I really liked Jennifer Jason Leigh's character having an affair with a doctor who plot to kill her husband in this film!