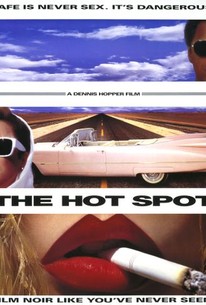 A drifter settles down in a small southwestern town and becomes involved in a web of crime and romance.

Critic Reviews for The Hot Spot

The Hot Spot seeps with atmosphere, unfolds at a deceptively relaxed pace, steadily accumulates noirish grit, then dizzily plunges into a Lynch-like plumbing of the dark passions and nasty secrets at the heart of Main Street, USA.

The film might have been a camp hoot if it weren't for the fact that Hopper still believes in all this stuff - he likes his women molten, duplicitous, and in kinky high heels.

For all its genre touches, ''The Hot Spot'' is best remembered for its little eccentricities.

[Madsen] keeps trying for Blanche DuBois and coming out with Gomer Pyle.

"Hot Spot" will never go down as timeless, neoclassic noir. But, with its Hopperlike moments, over-the-top performances and infectious music, it carries you along for a spell.

I feel at home in movies like "The Hot Spot." They come out of that vast universe formed by the historic meeting of B movies and the idea of film noir - films about the soft underbelly of the human conscience.

It's a nifty, nasty, sexy, and sometimes very funny little paperback of a movie that delivers its genre thrills with a light touch and an agreeable sense of its own lurid ridiculousness.

This neo-noir film directed by Dennis Hopper is like a trashy pulp novel that you might read and enjoy at the beach.

Lazily made neo-noir that sinks its teeth into the genre's cliches with limited success.

A pretty sexy and effective noir in broad daylight.

The Hot Spot is an incredibly hit-and-miss affair, with the various positive elements in the film hurt by a seriously overlong running time.

Audience Reviews for The Hot Spot

A good attempt at a film noir by Dennis Hopper. It's a little slow to begin with, but soon there are plenty of twists along the way. Things heat up when a drifter passes through a small town and sets off a chain of events which will change many lives. This film has a few themes running through it, hot women, American classic cars and some cool Jazz tunes as well. Doesn't seem to be on TV much, catch it when you can.

The Hot Spot is an outstanding erotic thriller from director Dennis Hopper, evocative of 40s film noir yet set perfectly in present day west Texas. Although this film is known to many only for Jennifer Connelly's topless scene, the nudity is only a bonus, and I found femme fatale Virginia Madsen much sexier. She plays Dolly Harshaw, a hot, manipulative seductress combining 50s Liz Taylor with 90s Sharon Stone. I don't love Don Johnson ordinarily, but he's effective here, and you'll fall in love instantly with Connelly's character. Johnson's character is not so much a criminal mastermind as a clever shady drifter (who picks up work as a car salesman, imagine that!) The acting is good all around; I liked Bill Sadler as a redneck sleazeball, and Jack Nance is hilarious as the bank president. How could you ask for more, really? The Hot Spot's got scandal, murder, blackmail, nudity, and a little humor set in a hot, dusty setting. The soundtrack's good too. One critic termed Madsen "relentless," but I reserve that for Maddie in Body Heat. That's a superior film, but uninhibited and insatiable apply just as well to this film. The action and the passion build to a fever pitch and climax unexpectedly in this steaming hot potboiler. It's a little long and meandering but a neo-noir success nonetheless.

This is quintessential film noir, a little gem that reeks of Stanwyck and Mitchum and ripples with pithy one-liners, nicely convoluted plot twists and a classic moral triangle. All the leads deliver knowing and unhurried performances, aided by a lean, laconic script and smooth direction - Jennifer Connelly is the astonishingly beautiful innocent, gradually bring dragged into a corrupt world ; Virginia Madsen simmers perfectly as the amoral and predatory manipulator ; and Don Johnson brings style and swagger to the central role, the cynical opportunist who finds a moral redemption of sorts, an outsider who finds himself both player and played in a seedy small-town intrigue. Like all the best noir, Hot Spot starts with the implicit assumption that the audience is grown-up and able to appreciate subtlety and inference, and this understated adherence to story and character is a long way from the referential post-modernism of Tarantino. And while it probably lacks some of Tarantino's flash and bravado, the dialogue drips with innuendo and irony, and I challenge anyone not to get caught up in both the ingenious narrative and the sheer enjoyment of the supporting cast, who provide plenty of visual and verbal humor. The silences and raised eyebrows at various points are a delight, we can work out the meanings for ourselves (and it's nice to be trusted to do that), and I don't think Don Johnson has been better before and or since. If you are looking for a Scorsese/Coppola-style gangster film, or an intricate ensemble piece with plenty of shooting like The Usual Suspects, this might not be your bag. But if your taste runs to Double Indemnity, The Big Heat or Out Of The Past, I can almost certainly guarantee that - like me - you will find The Hot Spot deeply satisfying, a storytelling treat that exemplifies the best of the genre and, unlike most of its late 80's/early 90's contemporaries, easily stands the test of time.

A tiny bit too slow and the plot messed up for me, but some steamy sex scenes and a young Don Jonhson was a candy to watch. My very first R rated Movie by the way. lol