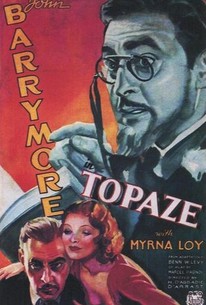 Producer David O. Selznick's adaptation of Marcel Pagnol's satirical play +Topaze stars John Barrymore, delivering a peerless comedy performance a full year before Howard Hawks allegedly "discovered" Barrymore's comic potential in Twentieth Century. Barrymore plays a French science teacher who is dismissed because he refuses to compromise his integrity by passing the student of a wealthy man. To console himself, Barrymore tinkers in his laboratory, where he stumbles upon the formula for a health tonic. Hired by unscrupulous tycoon George Mason to market the drink, Barrymore finds himself becoming as dishonest as his fellow businessmen. On the road to redemption toward the end, Barrymore wins the love of Mason's mistress Myrna Loy, who likewise seeks to change her ways. Eschewing much of the cynicism of the Pagnol original, Topaze aims more for whimsical chuckles than knowing nods. The property would be remade with most of its sardonic humor restored by Fernandel in 1951 and Peter Sellers in 1963.

It was not an easy play to make into a movie because the action centers about a gentle schoolmaster, but [director Harry] D'Arrast made a good job of it by getting a fine performance from John Barrymore.

Topaze is something of a pre-code comedy, but there is so much thought and sophistication crammed into its 78 minutes that it seems a shame to describe it in such vulgar terms.

It might have grandly worked back in the day, but its comedy is inert and its presentation is stagy for modern tastes.

If it weren't for the too-cute-for-words quality of Myrna Loy I really wouldn't have bothered. John Barrymore was great, but it started off kind of boring and even a little annoying. The dragginess of it eventually gave way to some minor fun and I in no way regretted seeing Topaze. It's no Thin Man, but it beats the hell out of Brett Ratner...