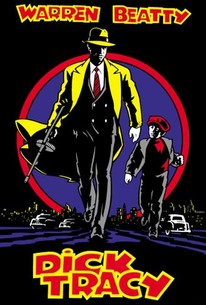 Critics Consensus: Dick Tracy is stylish, unique, and an undeniable technical triumph, but it ultimately struggles to rise above its two-dimensional artificiality.

Critics Consensus: Dick Tracy is stylish, unique, and an undeniable technical triumph, but it ultimately struggles to rise above its two-dimensional artificiality.

Critic Consensus: Dick Tracy is stylish, unique, and an undeniable technical triumph, but it ultimately struggles to rise above its two-dimensional artificiality.

Based on the famed detective hero of the comics, the story finds Dick Tracy in 1938 Chicago attempting to stop the crime spree of Big Boy Caprice.

Neil Summers
as The Rodent

Chuck Hicks
as The Brow

Jack Kehoe
as Customer at Raid

Tony Epper
as Steve, the Tramp

Ed McCready
as Cop at Tess'

Colm Meaney
as Cop at Tess'

Karen Russell
as Dancer
View All

A visual delight and a dramatic letdown.

Forget the plot. The essence of Dick Tracy lies in characters and style, and there it exceeds last summer's clunky, over-produced Batman.

The film moves at a chug when it should put the pedal to the floor.

Beatty and his team of collaborators have heightened the vibrantly tawdry urban night world of Chester Gould's classic comic strip.

This is a larger-than-life comic strip come-to-life, and its success comes from Warren Beatty making all the right moves to make the ultimate Dick Tracy movie.

Dick Tracy is a painted globe of a movie. Lushly artistic on the surface but resoundingly hollow, it bounces around aimlessly and finally ricochets right off the audience into oblivion, leaving hardly a trace.

The whole thing is very surface and frequently boring.

The under-twenty-fives who form most of the cinema audience have no special reason to warm to a comic-strip hero devised in 1931.

In spite of a stellar cast led by Beatty as the square-jawed cop, Dick Tracy never comes to life--it's the rough idea of a Dick Tracy movie, stiff, formless, and kind of dumb.

"Dick Tracy" isn't in the top tier of comic-book adaptations, but ingenuous art direction and set decoration and some crazy make-up jobs create a film that's still a delight to watch.

One hell of a film, Beatty (star and director) throwing everything at you and the kitchen sink. The cast alone is an accomplishment, but costuming, design, make-up, music, cinematography, this thing is an unqualified work of art. That fails to connect. A work without heart. It ought to be taught as a class. An agonising disappointment.

Based on the hugely popular comic strip from the 30's Tracy was merely a regular tough guy cop in an era that fought mobsters or hoods. The main difference that made this franchise so popular was the oddball mutant-like villains that he was up against which were pretty much like extreme caricatures. Almost like a fantasy cartoon version of 'The Untouchables', think 'Tron' but set in the 30's with gangsters. The film has a very simple plot that merely revolves around good guys with guns vs bad guys with guns, with women and children stuck in the middle. But being set in the stuffy 30's also means lots of classic visual cliches like...a lantern jawed hero, cackling villains in slick suits, beautiful dames in nightclubs, lots of dimly lit offices highlighted by neon lights streaking in between venetian blinds, fedora hats aplenty, tommy guns and spotless classic cars. The film was made in a highly inventive way making everything actually look like a real comic strip (very much like 'Sin City'), eye poppingly impressive and fresh for the time. Utilising the same few colours that were used in the original comic strip, lots of matte paintings, forced perspective, large sets and models. The visuals are highly impressive even by today's standards with the neon selected colour palette, a bit dark at times but its very effective and could be easily mistaken for CGI at times...that's how good it looks. Add to that the fantastic array of bright bold costumes, the blokes looked really dapper in their pinstripe suit attire. I also loved how all the buildings are also highly colourised inside and out, some times its just reflections or shadows causing the effect but basically all the buildings are visually made to look like a real live action cartoon/comic world, it all looks so damn nice. Nice usage of old classic cars as they zoom around, and of course the tommy gun makes it all come together in a surprisingly hardcore fashion. When when you see Beatty in full shot firing the tommy decked out with his luminous yellow trenchcoat and fedora you can't deny it looks awesome. The film is very reminiscent of Burton's 'Batman' and one reason might be to do with Danny Elfman creating the musical score. Its excellent as usual and very atmospheric but maybe a bit too close to his Batman work in all honesty. Really when you watch the film it all plays out very similar to Burton's gothic movie...the camera angles, use of shadow, violence levels, certain characters like the pug-ugly main baddie and glamorous blonde...and of course the basic plot. Oh lets not forget about the massive merchandising campaign and plugs. That's not necessarily a problem as it still works, it just feels like Batman without his armour outfit that's all. Like the comic strip the hoods are a main attraction with all the varieties of facial deformities on show. The heavy prosthetic makeup is really excellent on all the bad guys and really gives the whole experience that neat little edge over similar gangster films (comicbook visuals aside). Its just a shame there wasn't more of these ugly mobsters. Nice casting for all the villains with Al Pacino really going over board with his dark yet comical boss villain 'Big Boy Caprice'. Other hoods seem to vary in character which at times made the film unsure of what it wants to be. 'Flattop' is most definitely a sadistic ruthless baddie who does come across a tad eerie at times, perfectly played by the actual scary Forsythe naturally. On the other hand you have Hoffman as 'Mumbles' who is clearly more comic relief, so the films tone does tend to rollercoaster from scene to scene. The inclusion of Madonna wasn't required at all and was such bad casting, it really feels like Beatty stuck her in because she was sexually servicing him. I mean yeah she looks the part of a 30's dame and can sing obviously, but she can't act! The part should of gone to a proper actress and I firmly believe Sean Young would have made a better 'Tess Truehart', Young was the original choice. Very stylish fun flick which is also a decent homage to the original material surprisingly. Technically its close to a masterpiece really, considering how old the film is now the visuals really are fantastic. Yes it emulates the classic silver screen era well with that modern neo noir appearance, but at the same time its a bit flat on everything else truth be told. But what do you expect? its based on a comicbook and end of the day it gives you exactly what you'd expect from that material. One of the better adaptations that has made been over the years which has just about the right levels of violence and doesn't scrape the bottom of the barrel for an audience gaining PG-13.

Dark, charming with the popular style of comics, Dick Tracy is not one of the best pictures about heroes, but is one of the most unforgettables. Fresh.

Though the film as whole doesn't totally work, visually and stylistically, this is a masterpiece. Also a fantastic cast altogether and a standout performance from Dustin Hoffman.