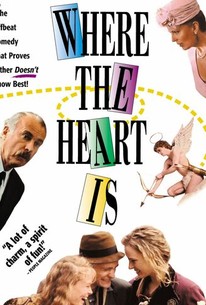 Where the Heart Is Videos

Where the Heart Is Photos

In this comedy from writer-director John Boorman, wealthy real estate mogul Stewart McBain (Dabney Coleman) owns a demolition firm which specializes in blowing up old buildings to make way for upscale new ones. When neighbors protest his plans to raze a dilapidated old building to make way for a new Brooklyn subdivision, television crews film the confrontation, and McBain comes off like a fool. His three spoiled children ridicule him. Tired of their carping, McBain gives them each 750 dollars and drops them off at the old building, known as the Dutch House. Daphne (Uma Thurman), Chloe (Suzy Amis), and Jimmy (David Hewlett) are at first completely lost, because they have no idea how to live in the real world. As McBain and his wife, Jean (Joanna Cassidy), monitor their children's progress, the three youngsters learn to get along with the neighborhood people and eventually set up a commune of sorts, into which they invite their friends and various homeless people.

Philip Williams
as Man with Writ

Critic Reviews for Where the Heart Is

Am I crazy in not seeing this as a New York story?

The silver screen of the '90s continues to present a world populated by the people bom with silver spoons in their mouths and the people who spoon-feed them their pumpkin pie.

Well intentioned but failed attempt at morality story about homelessness

Misses the mark by a mile.

The screenplay could have been lifted from any random night of idiotic TV sitcoms and the Boormans dress it up with some of the most precious and highfalutin dialogue this side of a college theater party. It's a groan a minute.

Audience Reviews for Where the Heart Is

One of my favourite movies where a bunch of rich young adults are forced by their folks to live out on their own. The actors are great, and it's funny as well. I loved this movie.

A miserable Dabney Coleman comedy with he and his artistic children living in a rundown apartment building. I didn't realize a younger Uma Thurman was in this one.

Strange movie with colorful characters. I liked the artist sister the most and her project of photographing murals with live people blended into the art.

Got this movie for one reason Suzy Amis. And its a crazy movie, about a rich dysfunctional family. And when the father goes to see the daughter perform at school, he snaps because of her body painting, so he throws his kids out into a city apartment house to let them fend for there own way, so begins the story and about the only thing I found interesting was the Body Art, it was so cool and its worth watching the movie for, and I also like the homeless magician shitty, he was such a good actor, reminded me a little of cannery row. but still with all this the movie only gets 3 stars, the art work 5 stars, but its the movie we are to grade here.

Where the Heart Is Quotes