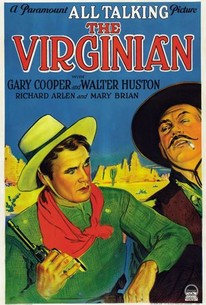 Gary Cooper, as a lanky Wyoming ranch and foreman, places his gun on a poker table after being insulted by one of the gamblers and intones, "If you want to call me that . . . smile." That much quoted line's origin is in this early sound version of the Owen Wister novel, The Virginian, directed by Victor Fleming. When the Virginian meets his old friend Steve (Richard Arlen), he gives him a job on his crew at the Box H Ranch near Medicine Bow, Wyoming. Newly arrived in town is the new schoolmarm, Molly Wood (Mary Brian), and both men take notice. Afterwards, in a saloon, The Virginian encounters the evil Trampas (Walter Huston), and the two get into an argument over a dancer. The Virginian calls Trampas' bluff but, although Trampas backs down, he seethes inside. Afterwards, following a christening party, The Virginian walks Molly back home, and a friendship grows between the two that burgeons into love. But when Steve joins up with Trampas and his gang of rustlers and is captured by a posse, The Virginian is forced to supervise Steve's lynching. After that, Molly spurns The Virginian. However, when The Virginian is wounded, Molly forgets all that, and nurses him back to health. They decide to finally marry, but Trampas interferes with their plans --Trampas wants The Virginian to leave town, and he is out gunning for him.

Gary Cooper
as The Virginian

Willie Fung
as Hong the Cook

Nena Quartaro
as Girl in Bar

Randolph Scott
as Rider
View All

Critic Reviews for The Virginian

Arguably the best of many screen versions, Fleming's 1929 film was instrumental in shaping Gary Cooper's screen image and in maintaining the Western mythology, specifically the contrast between East and West culture.

A landmark film, that helped define the Western hero as the mythical chivalrous man.

The Virginian (1929) is a classic western - a film adaptation of Owen Wister's 1902 western play and original novel.

There are no featured reviews for The Virginian at this time.