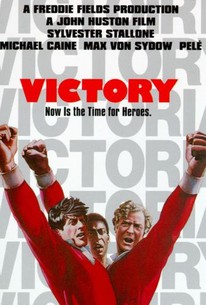 John Huston directed this exciting World War II action film, which culminates in a rousing soccer game. In a German prisoner of war camp, Major Karl von Steiner (Max Von Sydow), the camp commander, once a member of the German national soccer team, decides to put together a soccer match between a team of Allied prisoners, led by Captain John Colby (Michael Caine), a former English international soccer player. The game is to be played in Colombes Stadium in Paris and exploited for maximum propaganda effect by the Nazi publicity machine. Robert Hatch (Sylvester Stallone) is enlisted to assist the Allied prisoners to train for the event. But, in fact, the Allies are planning a risky escape during the soccer match. Famed Brazilian soccer great Pele makes an appearance in the film, along with Bobby Moore, the captain of Britain's 1966 World Cup champions, and Argentine soccer star Osvaldo Ardiles. ~ Paul Brenner, Rovi

Clive Merrison
as The Forger

Michel Drhey
as French
View All

Unsatisfactory both for fans of star-studded prison escape dramas and for football fans hoping to see cunningly devised tactics from Pele and his squad of internationals.

The form of the film is conventional, but the manner in which it has been executed is not.

A frankly oldfashioned World War II morality play, hinging on soccer as a civilized metaphor for the game of War.

This adventure story offers an epic possibility that John Huston knew how to develop to the max. [Full Review in Spanish]

Huston, showing admirable range in his old age, creates enough on-field magic and nostalgia for the beatiful game as an idyll of now-extinct sportsmanship.

A cracking good story and some of the best football action committed to celluloid have made this a Bank Holiday classic.

This film can only be described as The Great Escape with football, The story has been done a few times but I think this was one of the first, It has a great strong cast and some good performances by some top football players at the time, Stallone isn't a very convincing keeper but he tries, The match itself was fun with some good skills being shown mostly by Pele, The ending was a little annoying as the match finished in a draw and the way they were meant to escape which took half the film to plan wasn't used and they did it a much easier way but still it's a fun movie with a great cast that's very entertaining.

Imagine the brilliance of combining The Great Escape with football. If The Great Escape didn't have you crying manly tears of true awesomeness into a nice cup of tea then this surely will. The use of real actors and footballing professionals really does give the film a more realistic edge than many sporting films. Well at least during the games and training. Not just for football fans, who may actually be too picky and disgruntled of Stallone being the lead. Uplifting, salute worthy and just a bit of fun. Sydow is also brilliant as a nice German officer, which I didn't get since we all know that Germans in war films are evil.

Such a cheesy premise that you have to give it some credit for daring.

A real oddity in which WWII prisoners of war attempt to hatch an escape plan during an exhibition football match. All the usual feelgood rooting for the underdog cliches, but it's fairly watchable because of the presence of some genuine stars. Helps if you like football, of course...