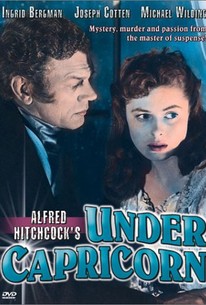 Returning to his old Elstree Studios headquarters in England, Alfred Hitchcock did his best with Hume Cronyn's adaptation of the James Bridie novel Under Capricorn. Costume drama was never Hitchcock's forte, as proven by his disappointing Jamaica Inn (1939), but Capricorn does have its moments. Set in Australia in the early 19th century, the film concerns the tribulations of Lady Henrietta (Ingrid Bergman), who was driven out of her home in disgrace after eloping with unkempt stableman Sam Flusky (Joseph Cotten). Accused of the murder of Henrietta's brother, Flusky has been transported to Australia, where he starts life anew as a prosperous businessman, even while his wife descends further and further into alcoholism and self-hatred. When her cousin Charles Adare (Michael Wilding) comes to visit, Henrietta falls in love with him; she also confides that it was she, and not Flusky, who was responsible for her brother's death. The operatic climax finds Lady Henrietta doing the "right thing" at the cost of her own happiness. At times ponderously directed, the film comes explosively to life whenever Margaret Leighton, cast as Lady Henrietta's spiteful housekeeper, dominates the scene. On a technical level, Under Capricorn is distinguished by the same "ten-minute takes" that Hitchcock had utilized in Rope; particularly effective is an uninterrupted dialogue sequence, played against the backdrop of a spectacular Technicolor sunset (courtesy cinematographer Jack Cardiff). ~ Hal Erickson, Rovi

Victor Lucas
as The Reverand Smiley

Critic Reviews for Under Capricorn

Giddily atypical in its style even as it explores lurid new byways of Hitchcock's familiar obsessions.

Under Capricorn is overlong and talky, with scant measure of the Alfred Hitchcock thriller tricks.

A strangely unexciting but emotionally intriguing Hitchcock costume drama with echoes of Rebecca and Suspicion.

It seems that neither Miss Bergman nor Mr. Hitchcock has tangled here with stuff of any better than penny-dreadful substance and superfical demands.

Shot in astonishingly elaborate long takes, this is the kind of film that finds the most brilliant poetry in the slightest movement of the camera -- a paradigm of cinematic expression.

Hitchcock was trying something new here, a melodrama where the terror comes from within, from the rot created by burying secrets, both for Henrietta and for the nation of Australia as a whole.

What it was is simply, as Truffaut stated, beautiful, and a deeply felt study of how people torture themselves and each other.

Under Capricorn has long been considered one of Alfred Hitchcock's weakest features, even by Hitchcock himself.

Talky and static, with little of Hitchcock's trademark suspense. The costume drama was not his metier, and he wisely decided to stay out of the genre after this.

Despite star power (Ingrid Bergman), this historical drama is one of Hitchcoçk's few weaak films.

The character-driven dark film has a poignant romanticism that is not thought of when you think of a Hitchcock film.

Audience Reviews for Under Capricorn

Any Hitchcock film has interesting things in but this somewhat overheated soap opera isn't one of his best. Would have benefited from being between 15 to 20 minutes shorter.

A melodrama with a few beautiful moments and interesting characters. Also, some nice long shots allow the performances to shine. It does not, however, has a clear focus and that makes it suffer a bit.

This is one of Hitchcock's lesser films, it's nothing like his others, and not in a good way. It's a melodrama set in the past. The only good thing I can say is that the cast is good.