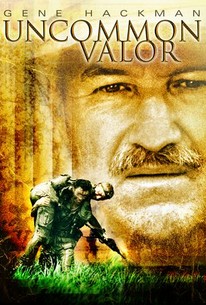 In this action-adventure set after the Vietnam war, retired Army colonel Rhodes still believes that his son, who disappeared in Laos a decade before, is still being held as a POW. Rhodes enlists the financial aide of a patriotic oil tycoon and gathers a motley crew of Vietnam vets. After intensive training, they return to the jungles to find the missing son.

Jerry Supiran
as Frank at Age 9

Michael P. May
as Soldier

The basic idea of Uncommon Valor is so interesting that it's all they can do to make a routine formula movie out of it. But they do.

A straight basic plot that doesn't mess around with complications. This flick is more of an action flick really, its set after the Nam war and not within the actual war. I did kinda expect a Nam war flick given the films poster but its not really, whether or not its actually based on any truths again I'm not really sure. I guess its possible, I think there were many US soldiers held after the war had finished and there certainly were many soldiers MIA. Whether anyone actually tried this idea without proper official backing I don't know, possible though. Lets not beat around the camouflaged bush here though, this premise is ripe for a ripping action flick, a real Rambo style emotional rollercoaster. I will give the film its due it does exactly that, you get exactly what you'd expect, it doesn't try to sugarcoat anything or be overally flashy, its cliched and corny at the best of times but its a real crowd pleaser if you ask me. Gene Hackman's son is MIA in a remote area of Laos ten years after the Nam war, he believes he's still alive and wants to rescue him but the government aren't interested. So off he goes to find a team of Nam vets to dive into Laos, rescue any POW's and bounce back across the border before anyone knew they were there...oh and kill a whole load of natives. Cue your obligatory recruitment sequences as Hackman snoops out soldiers from his sons platoon and other war torn troopers. Then cue your obligatory training sequences as the men are brought back up to scratch. Then cue your standard drop into Laos and preparation for taking out the POW camp. Its all very easy and by the numbers plus you have seen this kind of thing many times before. One could almost say its an 'A-Team' version of 'Predator' when Arnie and his boys take out the hostile camp at the start. You know what I mean by that...there's plenty of friendly fire, action is violent but you don't see anything, lots of cuts, little specks of blood and lots of extras leaping through the air. What makes this film so damn fun is the cast, oh boy what a cast! its a classic character actor line up. Under Hackman we have Tim Thomerson playing another Nam vet chopper pilot (before 'Air America'), Fred Ward in his year of recognition with two other major film releases, Harold Sylvester as the typical 80's token black character, Captain America himself Reb Brown, Randall 'Tex' Cobb surprisingly trying to act being a good guy and a very young Pat Swayze. Naturally each man has his own skills for individual moments in the action...Cobb would be the wild strongman type in case you might not have guessed it. But lets put the action man gung-ho action aside for a mo, its not an all out ham fest by any means. There is a lot of actual emotion and heart in this film, its based on reality, real events and probably struck a cord with many real vets. The action is a bit hokey and tame by today's standards sure, not overally realistic or well coordinated at times but it tries to be gritty and accurate. I do wonder how they didn't all manage to get killed really, they were hardly an example of special ops but hey never mind. The ending is weepy, its gets you, but the most important thing is you care about the characters, the film gets that right, you want them all to make it back. The whole thing feels very much like a TV movie really, it has moments of good production values with some nice explosions in the finale but overall it felt a bit restricted. The musical score seemed very cheap to me, as though it was a selection that you can rent and has been used in many action films. Hell Hackman's character looks like he's out for a good hike in the Alps when we see him in the jungle for the showdown. Still I can't deny I really enjoyed this film, I got hella pumped for the finale POW bust out, that got me going. I really wanted to see the guys succeed, really liked that team and the film is so heartfelt and sweet. Yeah i know that sounds pathetically lame but its true! such a pleasant Nam war flick.

Ted Kotcheff followed up his Vietnam vet saga First Blood with this little action romp whose plot is basically the same as that of the second Rambo film, though Kotcheff didn't direct that one. Gene Hackman is former Marine Colonel Rhodes who, for a decade, has been getting the run-around concerning the fate of his son who was captured as a POW during the Vietnam War. After hearing that his son and some other soldiers are possibly still alive and in a prison camp in Laos, the good colonel enlists the help of his son's former squad mates to form their own private rescue force, funded by MacGregor, an old friend of Rhodes who is a wealthy oil baron. This is basically just a fun "men on a mission" type of movie, namely The Dirty Dozen, with a plot that, as mentioned, was later used for First Blood part II. I appreciate that the film tries to deal with an important issue, but I didn't like that it ends up being a cheesy, silly, and cliched action romp. A more dramatic and serious approach, I think, would have been more welcome. It's not as over the top as the second Rambo film, but it is fairly light fare. The film does have it's heart in the right place, but I just thought it would have been a bit more original and less silly. I did have some fun watching it, hence why my grade isn't worse, but yeah, this is predictable, corny, and 80s in the extreme. Hackman does a decent job in the lead though, and he does elevate the proceedings a bit. Robert Stack is also fine as MacGregor, and I do love his voice. As for the men Rhodes recruits, we get the likes of Fred Ward, Reb Brown, Randall "Tex" Cobb, Harold Sylvester, Tim Thomerson, and a young Patrick Swayze. They all provide fair enough performances, despite being nothing but stock characters. The film does have some passable music, some of the sequences are competently done, and it is watchable, but I really have to admit that this should have been a lot better. See it if you want, but just don't expect anything amazing.

Pretty good. Gets too cliched at times, and honestly has too many characters to keep track of in my opinion. However, it ends up being a pretty solid movie.

Looks like the final battle of the Vietnam conflict is about to begin. A sort of Missing combined with The Dirty Dozen, but not as good as either of those movies.