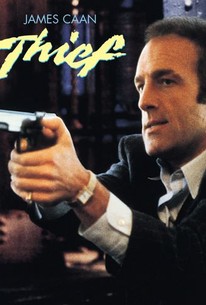 Critics Consensus: Thief is an invigorating cut of neon noir - proudly pulpy, steeped in authenticity, and powered by a swaggering James Caan at the peak of his charisma.

Critic Consensus: Thief is an invigorating cut of neon noir - proudly pulpy, steeped in authenticity, and powered by a swaggering James Caan at the peak of his charisma.

In Thief, James Caan plays Frank, a professional jewel thief who wants to marry Jessie (Tuesday Weld) and settle down into a normal life. In order to achieve his dream of a family, Frank--who is used to working solo--has to align himself with a crime boss named Leo (Robert Prosky), who will help him gain the money he needs to begin his domestic life. Frank plans to retire after the heist, yet he finds himself indebted to Leo and he struggles to break free. Thief is the first feature film from director Michael Mann and it seethes with his stylish, atmospheric direction. Though his cool approach may put off some viewers, it's a distinctive and effective story-telling approach, and Caan's performance ranks among his very best, making Thief a crime movie like few others. ~ Stephen Thomas Erlewine, Rovi

Bruce A. Young
as Mechanic #2

A slick Chicago crime-drama with a well-developed sense of pathos running throughout.

It's one of those films where you feel the authority right away: This movie knows its characters, knows its story, and knows exactly how it wants to tell us about them.

Mr. Mann may well become a very good theatrical film maker but, among other things, he's going to have to learn how to edit himself, to resist the temptation to allow dialogue that is colorful to turn, all of a sudden, into deep, abiding purple.

Thief aspires to be something more than a made-for-television movie that will be forgotten as soon as it's over, but it doesn't achieve that. [Full Review in Spanish]

On the one hand, it looks and feels like a high-gloss fantasy... But on the other, it's as gritty a crime picture as they come, dead set on getting even the smallest touches right. The combination makes for a movie unlike any other.

Thief wears its genre as a badge of honour from the very first scene.

Caan delivers what might be the best performance of his career.

James Caan gives a standout performance, investing in Frank a sense of determination that runs contrary to the fatalistic drive of the narrative.

[Michael] Mann has a talent for making cops into Cops, crooks into Crooks, and heroes into Heroes, for telling stories where stark types of the kind found in noir or crime fiction are transformed into legends.

Mann's feature debut is a gritty mass of machismo and kinetic energy, and James Caan turns in one of his greatest performances.

Gritty with good performances. Another example that Tuesday Weld really should have worked more than she did.

Frank: Look, you wanna pinch me then pinch me... I'll be out in ten minutes. If not, GET THE FUCK OFF MY CAR!  "Tonight, his take home pay is $410,000... tax free." Michael Mann's debut, Thief, is a stylish and intelligent heist thriller. There's a lot of cool stuff going on in Thief. It's one of those crime classics that have been forgotten because of movies like Heat. Thief is a great film in its own right. Mann showed the success he would be right from the get go. The film doesn't mess around, and has one of the single coolest end sequences I have ever seen. I'll admit, the film did take a little while to suck me in, but once it did I was enamored by it.  Frank is a professional thief. He breaks into safes for diamonds and cash only. He's always wanted to retire to a normal life with a wife and kid. He thinks he has the chance when a crime boss asks him to join up for a big score. Frank thinks he can take the cash and settle down to a nice life. The boss has slightly different plans for Frank which may interfere with him getting exactly what he's always wanted.  The heist scenes are really good, and Mann doesn't pump up the cliché of fighting against a clock and the police like the normal heist film will do. Thief isn't your standard heist film at all. Standard heist films go through a formula normally leading up to the final heist scene which will pretty much end the movie. Not this one. There's a lot of time after the final heist, and the after effects are the best part of the movie hands down.  The acting is left in the capable hands of James Caan. He is at his best in Thief. He plays a stubborn criminal to perfection. His performance in this one may be my favorite single performance from him ever. He struts his criminal character around with a sense of anger and cool, that just makes you pay attention to every little detail of his performance.  This is kind of a forgotten film in the grand scheme of cinema, but it is one you should really seek out. It is loads better than 98% of the crime thrillers out there. It has an accomplished director(now) at the helm and a terrific actor in the lead. There isn't much not to like about it. I wouldn't go as far as to say it's a masterpiece or anything, but it is one that will surely blow you away. Well, well worth a watch.

Michael Mann made his feature length directorial debut with this slick and stylish neo-noir heist thriller, and, though he perfected his craft later on with the far more polished and fully realized Heat, he got off to a solid and cracklingly good start here. James Caan shines in his best lead role as Frank- a wisecracking lone wolf veteran safecracker who dreams of starting over and living a completely legitimate life with his new girl. Of course, things are never that way, and he finds himself stuck between corrupt cops and volatile mobsters, forced to pull one last job before he can finally move on. The basic plot is nothing new, and the romance aspect is somewhat flat and not very compelling, but Mann makes it all quite bearable with his now trademark style, expressive camerawork and lighting, pulsating music, and high degree of realism and authenticity. The man has an extensive knowledge of police procedure and the criminal way, and it really shows in all of his films. He's not the kind of guy who pulls punches when it comes to delivering a compelling and realistic crime drama. Even though there's already enough of them, I think it would be interesting to see Mann direct a Punisher film. Lord knows that would have the potential to be one of the best ever...that is if he can come out of his slight funk and return to his roots (namely not shooting on digital). Sorry for the tangent. Moving on now. Caan is awesome as Frank, and this is seriously one of his best roles ever. Tuesday Weld is okay, but not all that interesting as Frank's girl Jessie. To round out some roles, Mann got Willie Nelson of all people, and both Dennis Farina and William Petersen in their acting debuts. James Belushi show's up as a pal of Frank's, and he's surprisingly really good. I've been skeptical of the man for years, and, though his borther was better, he's deserving of a tad more respect. This is quintessential and archetypical Mann. It is rough around the edges, but that contributes to part of its charm, and also makes his more polished aforementioned crown jewel (Heat) shine even more. If you want a rehashed crime plot done exceedingly well, then definitely give this one a spin.