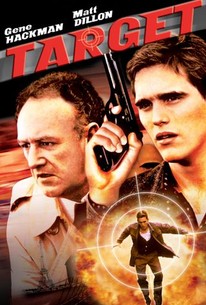 Seemingly mundane Walter Lloyd (Gene Hackman) confronts a world of espionage after his wife (Gayle Hunnicutt) is kidnapped while she vacations in France. Walter and son Chris (Matt Dillon) immediately set off to find her, and Chris soon learns that Dad is much more than he appears, being a former CIA agent and all. This suspense-thriller is from Arthur Penn, director of Bonnie and Clyde and Night Moves among others.

Richard Münch
as The Colonel

Jany Holt
as proprietress of Pension

Jean-Pierre Stewart
as Ballard
View All

It's great action and gripping fun.

The plot creaks along and nothing Penn does can align it.

Laughing at this stuff isn't good for the soul.

Pure cable flick stuff all the way, only with the added power of Hackman! (And his sidekick Dillonlad!)

...[an] engaging and intriguing little thriller.

Not one of Arthur Penn's best. I'm not sure if it was the director's goal to make this feel like "The French Connection" or "Bullet" but "Target" doesn't hit the bullseye and fails on every level. Not good.

i found it slow and boring turned it of about half hour into it!

A generally underappreciated thriller, which is a bit like a cross between "True Lies" and "Frantic". Gene Hackman plays a former CIA agent whose past catches up with him when his wife is kidnapped in Paris. Heretofore dismissed as a boring old fart by his teenage son (Matt Dillon), Hackman's exotic past and unsuspected resourcefulness are revealed as they strive to get their loved one back. Yes, it's a bit silly and the plot is alternately predictable and puzzling, so that I was repeatedly either two steps ahead or completely baffled, but the film is lifted by the quality of its performances and its superb use of locations. Dillon delivers a winning blend of surly rebelliousness and vulnerability, and Hackman is extraordinary, lending complexity and credibility to a character who could so easily have seemed ridiculous, in lesser hands. The genuine tenderness of Dillon and Hackman's father-son relationship is highly unusual, giving "Target" a distinctive flavour, unlike that of any other movie I can think of. It isn't another "Night Moves", but it's better than you might expect.