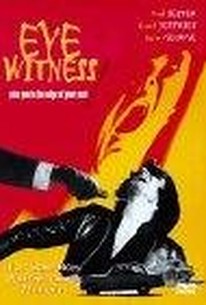 Ziggy (Mark Lester) is the young boy who witnesses the murder of a visiting black official by the police. Much like the boy who cried wolf, Ziggy has been known to stretch the truth and exaggerate. He is unable to convince the adults that he witnessed the killing. The murderous cops are soon on his trail as he hits the road with his sister (Susan George)and her boyfriend (Tony Bonner). The real police soon follow, after convincing his parents that Ziggy has told the truth for once. The boys grandfather (Lionel Jeffries) is the retired Colonel, a lighthouse keeper and lovable curmudgeon. Jeremy Kemp is the police chief, and the main heavy is played by Peter Vaughan. The boyfriend's car is cornered on a treacherous cliff where the villains try to ram the vehicle to the jagged rocks below. ~ Dan Pavlides, Rovi

David Lodge
as Policeman In Jeep

There are no featured reviews for Eyewitness (Sudden Terror) at this time.