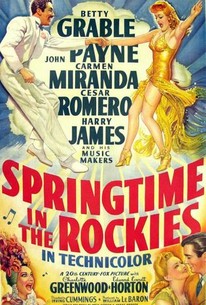 Springtime in the Rockies Photos

A musical remake of the 1936 comedy Second Honeymoon and the starring debut of Betty Grable, Springtime in the Rockies tells the not unfamiliar story of Vicky Lane (Grable, a Broadway dancer despairing over the tardiness of her partner Dan Christy (John Payne) who, as it turns out, has instead been busily engaged in a bit of extracurricular activities with socialite Marilyn Crothers (Trudy Marshall). In disgust, Vicky teams up with a former partner, Victor Prince (Cesar Romero), and leaves for the great outdoors while Dan attempts to go on without her. Unfortunately, the Commissioner (Jackie Gleason), Dan's harried agent, can only find backing for a new show if Dan and Vicky reunite and soon everyone, including ditzy secretary Rosita Murphy (Carmen Miranda) and Dan's flibbertigibbet valet McTavish (Edward Everett Horton), descends on the Canadian resort of Lake Louise where Harry James and His Music Makers make their headquarter. The usual complications arise but McTavish suddenly inherits a handsome sum of money and agrees to back a new show starring Vicky and Dan, Victor and Rosita, and the ubiquitous Harry James.Betty Grable performs "Ciribiribin and other popular selections, Carmen Miranda makes mincemeat of "Chattanooga Choo Choo" (in Portuguese, no less!), while band vocalist Helen Forrest and the Music Makers take care of the film's hit tune, Harry Warren and Mack Gordon's "I Had the Craziest Dream".

Harry James
as Himself

Bando Da Lua
as Themselves

Helen Forrest
as Singer
View All

Critic Reviews for Springtime in the Rockies

The supporting cast is a lot more interesting than the main leads. Some great comic turns by Carmen Miranda and especially the great Edward Everett Horton.

Audience Reviews for Springtime in the Rockies

There are no featured audience reviews yet. Click the link below to see what others say about Springtime in the Rockies!

Springtime in the Rockies Quotes