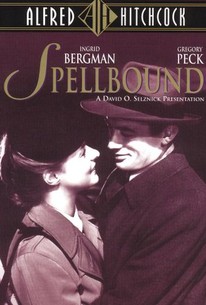 Critics Consensus: Spellbound's exploration of the subconscious could have benefitted from more analysis, but Alfred Hitchcock's psychedelic flourishes elevate this heady thriller along with Ingrid Bergman and Gregory Peck's star power.

Critic Consensus: Spellbound's exploration of the subconscious could have benefitted from more analysis, but Alfred Hitchcock's psychedelic flourishes elevate this heady thriller along with Ingrid Bergman and Gregory Peck's star power.

A psychoanalyst falls in love with her new boss, and it is soon discovered that he has difficulty with remembering things as he is a troubled amnesiac--who may also be a killer.

Joel Davis
as J.B. as a Boy

...beneath the facile trappings there is an intriguing Hitchcockian study of role reversal, with doctors and patients, men and women, mothers and sons inverting their assigned relationships with compelling, subversive results.

Today this seems above all a forward-thinking portrait of a woman battling for authority in a man's world.

Not to be speechless about it, David O. Selznick has a rare film in Spellbound.

A twisty thriller in the best Hitchcockian tradition, even if it may be a minor work in comparison to some of his more popular successes.

...a rare misfire within Hitch's otherwise solid body of work.

I don't agree with her much, but Pauline Kael was right about this one.

It may not be first-rank Hitchcock, but even second-tier Hitchcock is better than what most other directors produce.

Made in an age when master shots often became a standard scene style, Hitchcock shows some real thought behind his composition.

A commercial and critical hit in its day, this Best Picture Oscar nominee has seen its standing slip in the ensuing decades, as it's never mentioned on any list of Alfred Hitchcock's best works. That's a shame.

It has a lot of great stuff, not least of which is the odd dream sequence, designed by none other than Salvador Dali.

One of Hollywood's most explicit films about psychoanalysis, Spellbound takes a dubious and contrived approach to the subject, but the stars (Ingrid Bergman and Gregory Peck)shine and their love story is enjoyable.

A poorly-written film that deserves more credit for a surreal dream sequence designed by Salvador Dalí than a dated plot full of holes and casual sexism - especially how, for someone who is supposed to be so rational, Bergman's character is more stupid than our patience can take.

Dr. Alex Brulov: What is there for you to see? We both know that the mind of a woman in love is operating on the lowest level of the intellect! "Will he Kiss me or Kill me?" Spellbound is just another good thriller from the master of suspense, Alfred Hitchcock. This isn't one of his best movies by any means, it isn't Vertigo, Rear Window or Psycho. What it is, though, is a thoroughly interesting, engaging and suspenseful thriller. A new director is arriving at a mental asylum where he will begin his new job, replacing a man that has been there for 20 years. When he does arrive, the rest of the staff is baffled by his young age. The man also is showing signs of mental distress and lack of knowledge about his job. Anymore knowledge on the film would just take away from it. There's a lot of great art direction going on in Spellbound. There are some masterfully constructed and original scenes, the least of which, not being Salvador Dali's designed dream sequence. This Hitchcock classic is a fun ride and features all the elements of a Hitchcock film that make them so great. Obviously this is one you should see.

The Dali dream sequence was genius! Ingrid Bergman as a cold psychiatrist was perfect as well as a confused Gregory Peck. A story that never fully reveals itself until the last minutes, Spellbound is a film that takes commitment but is a psychological classic.