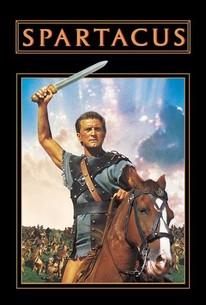 Spartacus (Kirk Douglas) is a rebellious slave purchased by Lentulus Batiatus (Peter Ustinov), owner of a school for gladiators. For the entertainment of corrupt Roman senator Marcus Licinius Crassus (Laurence Olivier), Batiatus' gladiators are to stage a fight to the death. On the night before the event, the enslaved trainees are "rewarded" with female companionship. Spartacus' companion for the evening is Varinia (Jean Simmons), a slave from Brittania. When Spartacus later learns that Varinia has been sold to Crassus, he leads 78 fellow gladiators in revolt. Word of the rebellion spreads like wildfire, and soon Spartacus' army numbers in the hundreds. Escaping to join his cause is Varinia, who has fallen in love with Spartacus, and another of Crassus' house slaves, the sensitive Antoninus (Tony Curtis). The revolt becomes the principal cog in the wheel of a political struggle between Crassus and a more temperate senator named Gracchus (Charles Laughton). Anthony Mann was the original director of Spartacus, eventually replaced by Stanley Kubrick, who'd previously guided Douglas through Paths of Glory. The film received 4 Academy Awards, including Best Supporting Actor for Ustinov. A crucial scene between Olivier and Curtis, removed from the 1967 reissue because of its subtle homosexual implications, was restored in 1991, with a newly recorded soundtrack featuring Curtis as his younger self and Anthony Hopkins standing in for the deceased Olivier. ~ Hal Erickson, Rovi

Douglas is terrific as the iron-jawed slave fuelled by righteous fury.

The great-granddaddy of Ridley Scott's Gladiator hasn't lost any muscle tone after nearly half a century, and Kirk Douglas's direct, unpretentious performance as the great slave-rebel Spartacus is more engaging than ever.

This may be the most literate of all the spectacles set in antiquity.

Asurprisingly apt companion piece to Paths of Glory in its consideration of the mechanisms of power.

It is a spotty, uneven drama.

Of all the historical epics, this pretty much takes the biscuit, with an unbelievable cast, incredible cinematography and plenty of quotable scenes.

The movie is full of wonderful character players who have fun with Trumbo's ripe dialogue.

The result, to all intents and purposes, is pre-ordained.

This chapter of the history of Rome stands out for its recreation of the lives of gladiators and its beautiful images that culminate in the confrontation of the Roman legions in the open field. [Full Review in Spanish]

Like a fast back with plenty of power, Kubrick twists and plunges. But he goes down on the twenty-yard line under the sheer weight of the opposition.

It is an indictment of ancient Rome, but in such a strictly modern idiom that one can't help feeling something has slipped up between the years.

The only film that Kubrick didn't have control of, this sumptuous and forever influential sword-and-sandal epic balances quite well its campy moments with scenes of dramatic intensity but also has a messy script full of moralizing and confusing behavior from most of its characters.

Stanley Kubrick's Spartacus is a defining classic that has withstood the test of time. Brilliantly acted and directed, this is one of the best epics that combines action, drama and romance. This is a stunning work of cinematic genius that is a must see for cinema fans of all ages looking for a terrific, well acted and brilliantly directed film with rousing action, thrills and a compelling story. This is among Kubrick's greatest works. This is a majestic piece of cinema, and remains one of the standout classics along with such works as Ben- Hur and Lawrence of Arabia. This is an epic film that is grand in scale and scope. This is a picture that only Stanley Kubrick could have directed. With a terrific cast of outstanding talent, this is a powerful work that delivers exciting visuals, great battles and memorable performances. Kirk Douglas delivers on-screen and his role is among the most famous roles in the long history of cinema. This is a wonderful film that is sure to please cinema buffs everywhere and it is among the greatest films ever made as well. The film is truly entertaining from start to finish right up to the unforgettable climax. This epic has had a profound impact on genre films for years to come, and though no film has surpassed the greatness of Spartacus, many pictures have been influenced by Kubrick's classic. A brilliant, compelling and unforgettable film that is among the greatest films ever made. A must see for serious film fans. This film is worth watching for Kirk Douglas performance alone, and there's plenty of aspects that stand out about this work. Stanley Kubrick would aim bigger and better with this film, and it set the stage for future films in Kubrick's long and legendary career.

A seminal classic of sorts. One that is of true, simple story about injustice, the absurd and of freedom. Quite the riveting movie with the fitting mood and atmosphere and elegant drama to drive its archetypal hero. It's both tragic and triumphant, and bravely courageous.

An early Stanley Kubrick masterpiece. Dispite doesn't present very much the style of the filmmaker. Fresh.