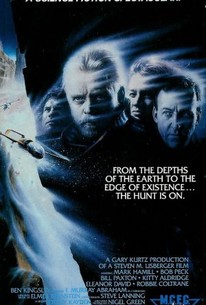 In a post-apocalyptic world, a fugitive named Byron (Bob Peck) is captured by cop Will Tasker (Mark Hamill) and his beautiful partner Belitski (Kitty Aldridge). But when bounty hunter Matt Owens (Bill Paxton) learns that there is a price on Byron's head, he tricks the police and absconds with the prisoner. In order to escape detection, Matt flies off into the slipstream --an environmental curiosity of high and harsh winds treated by a local religious cult as a god. The religious cult captures them and holds them captive. Byron has healing powers and the cult decides to bind him up to a giant kite in order to determine whether he is a good or bad spirit. Tasker and Belitiski re-appear and they free Matt after he agrees to help them get the kite-born Byron back down to earth. Matt flies upward to free Byron, but Belitski, not trusting Matt, flies upward herself. A violent wind tosses all three into parts unknown, while Tasker is almost killed by the kite. Matt is found to have been poisoned by Tasker and seeks to accompany a cave dweller named Ariel (Eleanor David) to her homeland, where he can get an antidote to the poison in his veins. Meanwhile, Byron is revealed to be an android. The three journey to a settlement dedicated to sensual pleasure. While they partake of the services, Tasker and Belitski shoot their way into the settlement, looking for Byron. ~ Paul Brenner, Rovi

Mark Hamill
as Will Tasker

Deborah Leng
as Girl on Swing

Rita Wolf
as Maya
View All

A script that could be remade today and that, with the good ideas it brings, would give for a splendid film in the right hands. [Full Review in Spanish]

An enjoyable romp with boundless ideas hampered only by the harsh realities of... production and post-production.

Really very sublime in places but ultimately too disconnected to be anything more than a curiousity (mainly in the casting).

I really enjoyed this sci-fi adventure movie, I was pleasantly surprised to find Mark Hamill (Luke Skywalker!) playing the bad guy. The story and actors are good, it's exciting and really cool. I highly recommend it.

Enjoyed this one....really well done for its time.