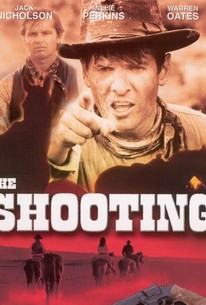 Director Monte Hellman used his beloved "hunter as hunted" theme for his near-existential western The Shooting. Jack Nicholson and Warren Oates are starred in this bare-bones tale of an ex-bounty hunter (Oates) with a price on his head and the cocky young gun (Nicholson) who hopes to collect. The film seems to be exclusively populated by Life's Losers; but even with portents of doom throughout, the ending is still a jaw-dropping experience. Demonstrating the parsimony he'd learned while working with Roger Corman, director Hellman shot The Shooting in Utah simultaneously with another feature, Ride in the Whirlwind, for a combined budget of $150,000. Completed in 1967, The Shooting did not receive widespread release until after Jack Nicholson achieved stardom in the early 1970s.

Will Hutchins
as Coley Boyard

Critic Reviews for The Shooting

The sound is poor. The colour erratic. It looks as if it has been shot on the backlot of Republic Pictures instead of on location. Yet better than any Western I have sees in, well, years, it conveys the original suspense of the genre.

Hellman's tight telephoto shots press the characters entomologically against the barren landscape; he revels in the technical charms of the medium and the scruffiness of his B-movie budget as audaciously as a French New Wave director.

It's easy to dismiss the deliberately obfuscated characters and inexplicable plot as arthouse pretentiousness. One's mileage depends on one's patience for postmodernism.

Heilman a master in the art of putting his camera, quite unpredictably, in the right place at the right time. He matches the absorbing imprecision of his subject with a spectacular precision of technique

[Monte] Heilman was a director who deserved attention, even six years ago.

The Shooting keeps making the Western genre feel new, as though it had no conventions.

An ambiguously motivated and almost surreal revenge film so open to interpretation it could be the '2001' of Westerns.

What is most intriguing about "The Shooting" is the constant sense of undefined menace throughout.

One of my favorite Westerns.

If there ever was an existential Western, this one is it.

Doesn't ask to be taken as an existentialist mechanism per say, though it certainly functions as one.

Audience Reviews for The Shooting

warren oates is so friggin' great in this film. the near constant air of menace is mostly down to him and the soundtrack. a very young jack nicholson gets by more on his unusual looks and ability to ride a horse than anything else. and millie perkins' performance is odd to say the least. the paranoid, existential and so-called 'acid' western said to have been inspired by the kennedy assassination

A very unique movie, it's really basic and dreamy. It feels more like an acid trip than an actual movie, the camera never moves toward the focus of the scene but wherever it feels like going. For the very little dialogue and character development it has, Warren Oates and Jack Nicholson manage to have some very memorable characters. It's not exactly an essential part of film history or westerns, but it's interesting.

Peculiar Western...existential, indeed. Millie Perkins sure was beautiful, but I think she's out of her depth as an actress here.