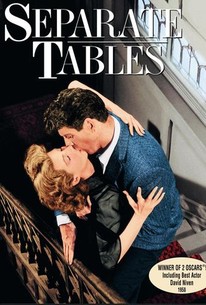 Based on Terence Rattigan's play, Separate Tables is about a number of characters and their adventures at a British seaside hotel. Among the guests are an alleged war hero (David Niven), a timid spinster (Deborah Kerr) and her domineering mother (Gladys Cooper), and a divorced couple (Burt Lancaster, Rita Hayworth) trying to re-ignite their romance despite the presence of his mistress (Wendy Hiller). All of the characters' lives become intertwined in the course of the film as the story examines love affairs and secrets. Separate Tables is a fine, textured drama, filled with terrific performances and was nominated for several Academy Awards, including Best Picture, Best Actress (Deborah Kerr), Best Actor (David Niven), Best Supporting Actress (Wendy Hiller), Best Screenplay From Another Medium, Best Cinematography and Best Music. Niven and Hiller won Oscars for the film.

May Hallatt
as Miss Meachum

Hilda Plowright
as Mabel
View All

Because [Terence] Rattigan here cares more for theatrical effects than human beings, the implication is assumed in headlines rather than established: his grey little world of failure remains obstinately out of touch with reality.

Deborah Kerr, her beauty hidden under the mousy façade of a faded and timid spinster, proves again that she is one of the finest actresses on the international screen.

It seems the perfect vehicle for social realism; but somehow it is not real.

How do you assemble a wonderful ensemble and then waste their talents? Here's an example.

The well-made play and once well-thought of film seems to be lifeless when viewed today.

Terence Rattigan's old-fashioned melodrama is well-acted by the entire ensemble. Surprisingly, it was nominated for Best Picture and garnered Oscars for David Nivel as a Major with fake identity and Wendy Hiller as the reserved hotel manager.

A touching and absorbing movie that (thankfully) doesn't wrap everything up with a big, dumb, happy ending.

Niven once mentioned in his autobiography that he was never a great actor but he really comes to the fore in this tale of strangers coming together at a hotel initially separated but eventually interacting in a marvelous way.

It is interesting to see some of the better movies of the 50's. I only watched this as the TV guide rated it 4 *'s. Can you imagine "living" at a seaside hotel for four years the way Major Pollock did? The movie was fine. When you "live" in a hotel for a long time, and in high society Britain, everybody knows everyone else's business. This can make for an interesting story. I was amazed to read however that two of the ensemble of actors won Academy Awards,

Another one that bored me. I couldn't get into it. I didn't know what the point of watching these different story lines was. I didn't think you got to know any of the characters well enough.