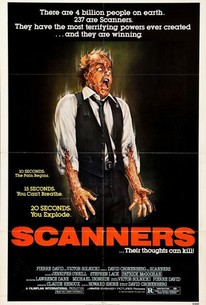 The title of this David Cronenberg sci-fi horror film refers to a group of people who have telekinetic powers that allow them to read minds and give them the ability to make other people's heads explode. The children of a group of women who took an experimental tranquilizer during their pregnancies, the scanners are now adults and have become outcasts from society. But Darryl (Michael Ironside) decides to create an army of scanners to take over the world. The only person who can stop him is his brother Cameron (Stephen Lack), who wants to forget that he was ever a scanner. Winner of the International Fantasy Film Award at the 1983 Fantasporto Film Festival, Scanners was followed by a pair of sequels, neither of which involved Cronenberg. ~ Matthew Tobey, Rovi

Robert A. Silverman
as Pierce

Lee Broker
as Security One

Sonny Forbes
as Killer in Attic

Jerome Tiberghien
as Killer in Attic

Denis Lacroix
as Killer in Barn

Anthony Sherwood
as Scanner in Attic

Ken Umland
as Scanner in Attic

Anne Anglin
as Scanner in Attic

Jack Messinger
as Scanner at Door

Dean Hagopian
as Programmer 2
View All

Scanners, according to David Cronenberg's new film, are people who can control others with their thoughts...The idea has a certain cachet. But Scanners doesn't pay off on it.

Like Tod Browning, Cronenberg doesn't have the stylistic resources to match the forcefulness of his ideas, but his movies remain in the mind for the pull of their private obsessions.

All this should give fans of David Cronenberg's previous pix their money's worth, although lack of any rooting interest vitiates any possible suspense and highly elegant visual style works against much shock value.

Scanners is so lockstep that we are basically reduced to watching the special effects, which are good but curiously abstract, because we don't much care about the people they're happening around.

The quality of the film's inventiveness is not always of the first order, which is too bad because Mr. Cronenberg does seem to be a director-writer of some style.

David Cronenberg's film is original, but it embraces the horror genre in a gratuitous and simple way. [Full Review in Spanish]

an intriguing and (by Cronenberg's standards, at least) fun movie

Cronenberg is so great at juxtaposing the surreal with the mundane to generate both creeps and (nervous) laughter.

The generous selection of bonus features includes vintage elements, like a trailer made up almost entirely of the exploding-head scene, a handful of radio spots, and a 1981 talk-show appearance in which Cronenberg discusses his work up to that point.

Watching this I try to imagine Cronenberg's directing his lead actors: "I need you to look as if you're trying to blow somebody's head off ... by only thinking about it." I try to imagine his actors processing that direction: "What exactly does THAT look like? What does this guy want?" All about big government conspiracy, and the rebellion against that, this is some big fun if you can get over the age of the work.

A scientist trains a young man with deadly psychic powers (a "scanner") to infiltrate a group of fellow telepaths bent on world domination. A well-made, uniquely conceived horror thriller, although it lacks the psychological subtexts that make director David Cronenberg's best work dig under your skin.

A special-effects driven mixed bag of a movie about a group of special people called "scanners" who have the ability to read peoples minds, or if they decide they do not like them or need to make a point, make their heads explode. However, when one ruthless, murdering man named Revok (Michael Ironside) threatens to use his powers to attempt to take over the world, another scanner, Vale (Stephen Lack) makes it his mission to stop him at any cost. The plot is fairly cliché and predictable to a point, with Ironside outshining Lack's performance by a mile thanks to the great intensity and ferocity he gives whenever he is on the screen. It is a largely entertaining movie but it could have used more fleshing out of the story line, one that attempted to throw out at least some surprises once in a while. Far from director David Cronenberg's best works, but ironically, this is the movie that put him on the map so to speak.

In this sci-fi horror action film from David Cronenberg, the Scanners of the title refer to a group of humans who possess extraordinary and immensely powerful telepathic and telekinetic abilities which essentially sees them becoming social outcasts. When one of them, Darryl Revok goes rogue and plans to create a scanner army to take over the world, another, Cameron Vale is recruited by a shady corporation named ConSec to bring Revok down. This film is all over the place. I described it as sci-fi horror action, and while it has some of those qualities, it also kind of exists in its own unique unclassifiable bubble. It's also got mixings of class warfare, prejudice against the superior-abled, and a sense of psychedelia combined with anti-authoritarianism. It's definitely a Cronenberg film alright. It's a very dated film, but in a pretty cool way. I liked that it reeked of the early 80s, as it gives the proceedings a unique vibe and atmosphere, and a sense of style that you don't really see today. I think we need a lot more chrome and stuff that's blood red in color. The film does have an eerie and unnerving atmosphere and tone that really help enhance the ridiculous and nutty plot. This is further helped by the set design, cinematography, effects, and Howard Shore's creepy score. The acting from the lead is admittedly pretty bland and distracting, but Michael Ironside is wonderfully batty and menacing as Revok. All in all, a weird film, and a bit of a mess. But it's got some cool ideas, is technically well made, and is pretty entertaining, so yeah, give it a watch.