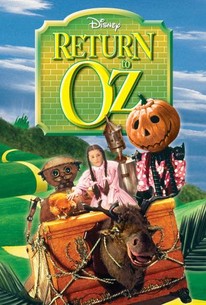 Critics Consensus: Return to Oz taps into the darker side of L. Frank Baum's book series with an intermittently dazzling adventure that never quite recaptures the magic of its classic predecessor.

Critics Consensus: Return to Oz taps into the darker side of L. Frank Baum's book series with an intermittently dazzling adventure that never quite recaptures the magic of its classic predecessor.

Critic Consensus: Return to Oz taps into the darker side of L. Frank Baum's book series with an intermittently dazzling adventure that never quite recaptures the magic of its classic predecessor.

This '80s follow-up to The Wizard of Oz is based upon two of L. Frank Baum's later Oz books. In Return to Oz (a version that may be a bit too scary for young children), Auntie Em sends Dorothy to a sanitarium where hopefully she will clear her head from all of the "Oz nonsense." This doesn't work, for soon Dorothy manages to return to Oz, but things have definitely changed. She finds her old friends turned to stone and discovers that the awful Nome King has taken over Oz.

News & Interviews for Return to Oz

View All Return to Oz News

Critic Reviews for Return to Oz

Return to Oz doesn't soar when it so clearly should.

The basic problem with Return to Oz is its unrelieved oppressiveness, an atmosphere resulting mainly from our sense of Dorothy's constant plight.

Return to Oz is the kind of movie that encourages people to rent home videotapes of The Wizard of Oz and The Wiz.

The new characters may not have the human qualities the others had the souls and personalities. However, they are interesting enough and true to the tales spun by Baum in The Land of Oz (1904) and Ozma of Oz (1907).

"Return to Oz" won't make anyone forget "The Wizard of Oz," or even "The Neverending Story,"... Then again, it's as good an excuse as any for treating the family to popcorn.

Return to Oz is an astonishingly somber, melancholy and, sadly, unengaging trip back to a favorite land of almost every American's youth.

In Return to Oz [Fairuza Balk] and [director Walter] Murch have managed the rare feat of giving a fairy tale the illusion of reality.

From just about every standpoint Return to Oz is competently executed but ill-advised. It's hard to imagine whom the filmmakers are trying to reach; it's easier to predict that filmgoers of all ages will be pretty well turned off.

Disney recaptures the dark side of L Frank Baum's Oz stories in this exciting sequel to the 1939 classic.

Return to Oz isn't a musical and doesn't match the wit and magic of the 1939 original. But it's an appealing picture on its own terms, if you can overlook a couple of big miscalculations.

On its own merits, has some very fine cinematic flourishes... if we can but manage the herculean feat of separating it from the older movie.

Audience Reviews for Return to Oz

Good Effects and developed characters. A sequel to The Wizard of Oz was a good idea, but there was no excitement in this film, and I remember watching this on VHS as a child but it still is not entertaining as it was back then as Return to Oz is just plain creepy.

Hideously HIDEOUSLY underrated. Seriously. This is actually quite an interesting film. It's completely unlike its predecessor, the original 1939 "Wizard of Oz." This film is not upbeat. It does not have songs. Simply put, this feels like American McGee's Alice, absolutely insane, but bizarrely (and frighteningly) accurate to the book. This film garnered tons of hate at the time of release, but now people are beginning to appreciate its dark tone. If you have to watch a kids film for some reason or another, just pop this one in. It will surprise you.

If you loved The Wizard of Oz, you'll like accompanying Dorothy (played by Fairuza Balk) on this second thrilling adventure based on L. Frank Baum's "Oz" books! Viewers will hear no songs nor see any Munchkins. It's very different, but equally enjoyable, trip down the Yellow Brick Road, with young star Balk outstanding as the heroine. It gets pretty scary at times and isn't all fluff and wonder like the Oz of yore. This is nevertheless a magical film.