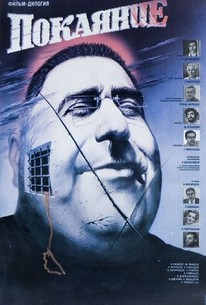 Repentance (Pokayaniye) features Avtandil Makharadze in a dual role. As Georgian mayor Varlam Aravidze, Makharadze is a strutting, arbitrarily cruel dictator, something of a composite Stalin and Hitler. Visually he very closely resembles Lavrentiy Beriya, Stalin's right hander and one-time KGB chief. As Abel, the mayor's son, Makharadze finds himself in the middle of an ideological squabble when his father dies. Zeinab Botsvadze, a local woman who had suffered mightily under the mayor's regime, refuses to allow the old man's corpse to be interred. Despite the son's Herculean efforts, Botsvadze continues digging up the late mayor's body, a symbolic gesture to prevent the dead man's villainy from being forgotten. Repentance was the first Soviet film that openly denounced the horrors of Stalinism, though the Georgian director Tengiz Abuladze (known for his poetic and surrealist films) chose to make it allegorical, deliberately using anachronisms and making the leading character look like a combination of Stalin's henchman Lavrenti Beriya, Hitler, and Mussolini. An interesting point -- the last name chosen for the leading character is totally fictional, there is no such name as Aravidze in Georgia. In fact, "aravi" means "nobody" in Georgian. The filmmakers opted for such a name in order not to offend any real person in the Republic of Georgia. Filmed in 1984, Repentance fell victim to Soviet censorship from the moment it left the editing room. When it was finally released in 1987, the film was deservedly garlanded with several awards, including the Cannes Film Festival Special Jury Prize.

Nato Otijigava
as Ketevan as a Child

Dato Kemkhadze
as Abel as a child

[Repentance] is lit with bursts of satiric humor, with music, bits of opera and great flights of surreal imagery, which only serve to intensify its growing horror. And it is never less than physically gorgeous.

Repentance would seem mordantly funny if its wit, like that of its central character, weren't also so cruel.

Its significance as a social and historical document far outstrips its value as art.

Tengiz Abuladze's dreamlike allegorical fantasy about Stalinism, as well as despotism in general, is probably the best known and almost certainly one of the best Soviet films to have surfaced as a result of glasnost.

The result is neither as minatory nor as moving as it thinks it is, despite some arresting surrealist images and the performance of Makharadze as Varlam.

As Varlam, Avtandil Makharadze gives a performance which is operatic in its scope... the effect is chilling.

Its message is worth heeding everywhere. And its frontal attack on Stalinism makes it a landmark in Soviet film history.

It is a defiant assault on revisionist history that shows, through a series of harrowing flashbacks, that the crimes of the past cannot simply be buried and forgotten.

As Gorbachev's Glasnost was being welcomed around the world, the final part of Abuladze's trilogy seemd relevant to a country coming to terms with its violent past. Now, it seems like a talky history lecture.

Repentance stands as one of the finest films to be released as a result of glasnost.

It's worth more for its daring political statement against the totalitarian Soviet regime of Stalin than as a work of moving satire.

A bold film from the Soviet Union, affirming the ethical values of religion and the cultural values of art.

There are no featured audience reviews yet. Click the link below to see what others say about Monanieba (Repentance)!